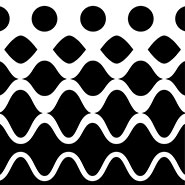 Artist’s impression, inspired by the work of the artist Maurits Cornelis Escher, of the continuous morphing between particle- and wave-like behaviour of light achieved in the Bristol experiment. Nicolas Brunner, Jamie Simmonds

What is light made of: waves or particles? This basic question has fascinated physicists since the early days of science. Quantum mechanics predicts that photons, particles of light, are both particles and waves simultaneously. Reporting in Science, physicists from the University of Bristol give a new demonstration of this wave-particle duality of photons, dubbed the ‘one real mystery of quantum mechanics’ by Nobel Prize laureate Richard Feynman.

The history of science is marked by an intense debate between the particle and wave theories of light.  Isaac Newton was the main advocate of the particle theory, while James Clerk Maxwell and his greatly successful theory of electromagnetism, gave credit to the wave theory. However, things changed dramatically in 1905, when Einstein showed that it was possible to explain the photoelectric effect (which had remained a complete mystery until then) using the idea that light is made of particles: photons. This discovery had a huge impact on physics, as it greatly contributed to the development of quantum mechanics - the most accurate scientific theory ever developed.

Despite its success, quantum mechanics presents a tremendous challenge to our everyday intuition. Indeed, the theory predicts with a remarkable accuracy the behaviour of small objects such as atoms and photons. However, when taking a closer look at these predictions, we are forced to admit that they are strikingly counter-intuitive. For instance, quantum theory predicts that a particle (for instance a photon) can be in different places at the same time. In fact it can even be in infinitely many places at the same time, exactly as a wave. Hence the notion of wave-particle duality, which is fundamental to all quantum systems.

Surprisingly, when a photon is observed, it behaves either as a particle or as a wave. But both aspects are never observed simultaneously. In fact, which behaviour it exhibits depends on the type of measurement it is presented with. These astonishing phenomena have been experimentally investigated in the last few years, using measurement devices that can be switched between wave-like and particle-like measurements.

In a paper published today in Science, physicists from the University of Bristol give a new twist on these ideas. Dr Alberto Peruzzo, Peter Shadbolt and Professor Jeremy O'Brien from the Centre for Quantum Photonics teamed up with quantum theorists Dr Nicolas Brunner and Professor Sandu Popescu to devise a novel type of measurement apparatus that can measure both particle and wave-like behaviour simultaneously. This new device is powered by quantum nonlocality, another strikingly counter-intuitive quantum effect.

Dr Peruzzo, Research Fellow at the Centre for Quantum Photonics, said: “The measurement apparatus detected strong nonlocality, which certified that the photon behaved simultaneously as a wave and a particle in our experiment. This represents a strong refutation of models in which the photon is either a wave or a particle.”

Professor O’Brien, Director of the Centre for Quantum Photonics, said: “To conduct this research, we used a quantum photonic chip, a novel technology pioneered in Bristol. The chip is reconfigurable so it can be programmed and controlled to implement different circuits.  Today this technology is a leading approach in the quest to build a quantum computer and in the future will allow for new and more sophisticated studies of fundamental aspects of quantum phenomena.”