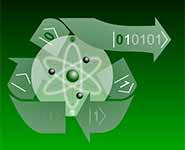 A quantum computer's bits, qubits, can be recycled so that the same powerful calculations can be performed with a fraction of the resources. Enrique Martín-López

A research team from the University of Bristol’s Centre for Quantum Photonics (CQP) have brought the reality of a quantum computer one step closer by experimentally demonstrating a technique for significantly reducing the physical resources required for quantum factoring.

The team have shown how it is possible to recycle the particles inside a quantum computer, so that quantum factoring can be achieved with only one third of the particles originally required.  The research is published in the latest issue of Nature Photonics.

Using photons as the particles, the Bristol team constructed a quantum optical circuit that recycled one of the photons to set a new record for factoring 21 with a quantum algorithm - all previous demonstrations have factored 15.

Dr Anthony Laing, who led the project, said: “Quantum computers promise to harness the counterintuitive laws of quantum mechanics to perform calculations that are forever out of reach of conventional classical computers.  Realising such a device is one of the great technological challenges of the century.”

While scientists and mathematicians are still trying to understand the full range of capabilities of quantum computers, the current driving application is the hard problem of factoring large numbers.  The best classical computers can run for the lifetime of the universe, searching for the factors of a large number, yet still be unsuccessful.

In fact, Internet cryptographic protocols are based on this exponential overhead in computational time: if a third party wants to spy on your emails, they will need to solve a hard factoring problem first.  A quantum computer, on the other hand, is capable of efficiently factoring large numbers, but the physical resources required mean that constructing such a device is highly challenging.

CQP PhD student Enrique Martín-López, who performed the experiment, said: “While it will clearly be some time before emails can be hacked with a quantum computer, this proof of principle experiment paves the way for larger implementations of quantum algorithms by using particle recycling.”