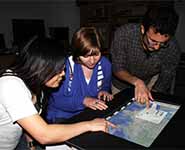 A tabletop system where users can come together and view shared content will be unveiled today [Tuesday 9 October] by a team of scientists, led by the University of Bristol.

Researchers from the University’s Department of Computer Science will present PiVOT (personalised view-overlays for tabletops) at the 25th ACM UIST 2012, a symposium for innovations in the software and technology of human-computer interfaces.

Through two view zones, PiVOT provides personalised views to individual users while presenting an unaffected and unobstructed shared view to all users. The system supports multiple personalised views which can be present at the same spatial location and yet be only visible to the users it belongs to, a function that is not available in any other tabletop system.

PiVOT also allows the creation of personal views that can be either 2D or auto-stereoscopic 3D images.  PiVOT is a result of the exploration of different designs to address the opposing challenges of shared and personalised views.

Sriram Subramanian, Professor of Human-Computer Interaction in the Department of Computer Science’s Interaction and Graphics group, said: “The tabletop system has been created by using an arrangement of liquid crystals.  Users can come together and view shared content or by leaning forward can get personalised views that are only visible from that particular view point.

“For example, when looking at a city map, if I want to see traffic information I can lean forward and see the traffic-overlay while other people can, at the same time, lean forward and see the elevation information for a particular street.  Everyone else who is not leaning forward will continue to see the undistorted city map. Their view will not interfere with mine, even if it is on the same spatial location.”

A sample prototype has been implemented and evaluated to validate the researchers design ideas and a set of sample applications that demonstrate the utility of the system can be run.

This work is supported by the European Research Council (starting Grant Agreement 278576) under the Seventh Framework Programme and Microsoft Research through the PhD Scholarship Programme.

Bristol Interaction and Graphics (BIG), based in the University of Bristol’s Department of Computer Science, is united by a common interest in creative interdisciplinarity. BIG acts as a hub for collaboration between social scientists, artists, scientists and engineers to combine efficient and aesthetic design. The group is particularly interested in areas which couple the design of devices with deployment and evaluation in public settings. Members of the group have expertise in research areas spanning human-computer interaction, visual and tactile perception, imaging, visualisation and computer-supported collaboration.