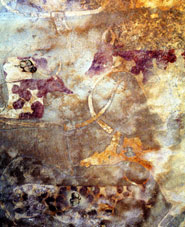 A fresco of painted cattle at the wadi Imha, site 03/705, in the Tadrart Acacus Mountains, Libyan Sahara. Numerous rich and vivid rock art images depicting scenes of cattle are found widely across north Africa, dating from at least 7,000 years ago Roberto Ceccacci, © The Archaeological Mission in the Sahara, Sapienza University of Rome

The first unequivocal evidence that humans in prehistoric Saharan Africa used cattle for their milk nearly 7,000 years ago is described in research by an international team of scientists, led by the University of Bristol, UK, published today in Nature.

By analysing fatty acids extracted from unglazed pottery excavated from an archaeological site in Libya, the researchers showed that dairy fats were processed in the vessels.  This first identification of dairying practices in the African continent, by prehistoric Saharan herders, can be reliably dated to the fifth millennium BC.

Around 10,000 years ago the Sahara Desert was a wetter, greener place; early hunter-gatherer people in the area lived a semi-sedentary life, utilising pottery, hunting wild game and collecting wild cereals.  Then, around 7,000-5,000 years ago as the region became more arid, the people adopted a more nomadic, pastoral way of life, as the presence of cattle bones in cave deposits and river camps suggests.

Domesticated animals were clearly significant to these people: the engraved and painted rock art found widely across the region includes many vivid representations of animals, particularly cattle.  However, no direct proof that these cattle were milked existed – until now.

Researchers at the Organic Geochemistry Unit in Bristol’s School of Chemistry, with colleagues at Sapienza, University of Rome, studied unglazed pottery dating from around 7,000 years ago, found at the Takarkori rock shelter in the Tadrart Acacus Mountains, Libya.

Using lipid biomarker and stable carbon isotope analysis, they examined preserved fatty acids held within the fabric of the pottery and found that half of the vessels had been used for processing dairy fats.  This confirms for the first time the early presence of domesticated cattle in the region and the importance of milk to its prehistoric pastoral people.

Julie Dunne, a PhD student in Bristol’s School of Chemistry and one of the authors of the paper said: “We already know how important dairy products such as milk, cheese, yoghurt and butter, which can be repeatedly extracted from an animal throughout its lifetime, were to the people of Neolithic Europe, so it’s exciting to find proof that they were also significant in the lives of the prehistoric people of Africa.

“As well as identifying the early adoption of dairying practices in Saharan Africa, these results also provide a background for our understanding of the evolution of the lactase persistence gene which seems to have arisen once prehistoric people started consuming milk products.

“The gene is found in Europeans and across some Central African groups, thus supporting arguments for the movement of people, together with their cattle, from the Near East into eastern African in the early to middle Holocene, around 8,000 years ago.”

Co-author Professor Richard Evershed of Bristol’s School of Chemistry, added: “While the remarkable rock art of Saharan Africa contains many representations of cattle – including, in a few cases, depictions of the actual milking of a cow – it can rarely be reliably dated.  Also, the scarcity of cattle bones in archaeological sites makes it impossible to ascertain herd structures, thereby preventing interpretations of whether dairying was practiced.

“Molecular and isotopic analysis of absorbed food residues in pottery, however, is an excellent way to investigate the diet and subsistence practice of early peoples.  It’s an approach my colleagues and I have previously applied to successfully determine the chronology of dairying, beginning in the Fertile Crescent of the Near East and spreading across Europe.”

The research was funded by the UK’s Natural Environment Research Council (NERC).

For a taste of research themes in the OGU play the Palaeodetectives interactive science adventure!