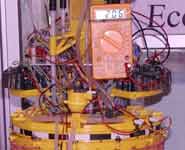 Dr Jonathan Rossiter, Senior Lecturer in the Department of Engineering Mathematic and a member of the Bristol Robotics Laboratory (BRL), has secured a Leverhulme Trust Research Project Grant for his project ‘A robot that decomposes: towards biodegradable robotic organisms’.

Dr Jonathan Rossiter, Senior Lecturer in the University of Bristol’s Department of Engineering Mathematics and a member of the Bristol Robotics Laboratory (BRL), has secured the two-year Research Project Grant for his project ‘A robot that decomposes: towards biodegradable robotic organisms’.

Conventional robots are predominantly made of rigid resilient materials, many of which are toxic, non-biodegradable and have a negative impact on the natural ecology.

Any robot deployed in the environment must therefore be continually tracked and, once it has reached the end of its useable life, must be recovered, dismantled, and made safe.  This adds enormous complexity to the running of robotic projects and there is the ever-present risk that the robot will be irrecoverable with consequent damage to the eco-system.  Additionally these characteristics severely limit the number of robots that can be employed since each must be tracked and recovered.

Dr Rossiter, together with co-investigator Dr Ioannis Ieropoulos, Senior Research Fellow in the BRL, Department of Engineering, Design and Mathematics at the University of the West of England (UWE Bristol), aim to show that autonomous soft robotic artificial organisms can exhibit an important characteristic of biological organisms: graceful decomposition after death.

Dr Rossiter said: “In this project we will take a radical step away from conventional robots and we hope to create a biodegradable robot.

“Once a biodegradable robot has reached the end of its mission, for example having performed some environmental cleanup activity following an oil spill, it will decompose into harmless material.”

Since there will no longer be the need to track and recover each robot, the deployment of large numbers of biodegradable robots in the environment will become inherently safe.  Hundreds or thousands of robots can therefore potentially be deployed, safe in the knowledge that environmental impact will be zero.

Biodegradability will enhance the abilities of the Ecobot robot developed at the BRL.  Ecobot is an autonomous robot that gets its energy from the consumption of biomass from the environment.

Dr Jonathan Rossiter in the University of Bristol’s Department of Engineering Mathematics, has secured the two-year Leverhulme Trust research grant worth £209,558 for his project ‘A robot that decomposes: towards biodegradable robotic organisms’, which will start on 1 May 2012.

The BRL’s vision is to transform robotics by pioneering advances in autonomous robot systems through the elucidation of the underpinning mechanisms required to create robot systems, which behave intelligently without human supervision.

Drs Rossiter and Ieropoulos are both members of the BRL.

The Leverhulme Trust was established in 1925 under the Will of the first Viscount Leverhulme. It is one of the largest all-subject providers of research funding in the UK, distributing funds of some £60 million every year.