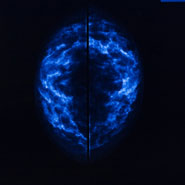 A safe, low-cost system that would allow women of all ages to be screened for breast cancer in GP surgeries, or alternative high street locations, has come a step closer following a third clinical trial.

A safe, low-cost system that would allow women of all ages to be screened for breast cancer in GP surgeries, or alternative high street locations, has come a step closer following a third clinical trial.

Developed by Micrima, a spin-out from Bristol University, the revolutionary new screening technology – developed from a land mine detection project - now takes just eight seconds to provide a three-dimensional breast scan that provides results that are comparable with X-ray mammograms.

However, the MARIA ( Multistatic Array processing for Radiowave Image Acquisition) system is not only safer and cheaper than current breast screening methods, it should also provide more reliable results in younger women who are overlooked for screening at present, with the additional benefit of being more comfortable for women undergoing the test.

The team behind Micrima is now raising new funding to help them achieve their goal of commercialising the targeted product – making breast cancer scans as normal as a dental or eye check-up.

Roy Johnson, Executive Chairman of Micrima, said "The new 3D breast screening platform under development aims to be safer, more convenient and more economically viable in a greater number of countries, in addition to providing a practical solution to screening women below the age of 50."

Breast cancer is the most common cause of death in women between the ages of 35 and 55 in Europe, and the leading cause of death in many countries. Early diagnosis dramatically improves survival rates, yet most tumours are not discovered early enough – particularly in younger women.

National breast screening programmes, using X-ray mammography, are the front-line weapon in the fight to improve survival statistics. But the equipment is bulky, expensive and involves compression of the breast in order to produce results.

Meanwhile, only women aged over 50 in the UK are invited by the NHS for regular screening, and then only every three years.

X-ray mammography also suffers from relatively high missed and false detection rates and tends to have poor results in the denser breast tissue associated with younger, pre and peri-menopausal women.

The latest phase of the clinical trial involved women at Frenchay Hospital’s Breast Care Centre in Bristol, as well as Southmead Hospital, also in Bristol.

Dr Mike Shere, breast specialist at Southmead Hospital said "We are very excited about the potential of this completely new method of breast imaging. It has none of the disadvantages of the current methods, ultrasound, mammography and MRI. It is quick, safe, comfortable and cheap, and is already producing good images with high sensitivity."

The MARIA technique uses an innovative radar system developed from land mine detection by a team at Bristol University led by Professor Ian Craddock, Professor of Electrical and Electronic Engineering, and Professor Alan Preece, Emeritus Professor of Medical Physics. The project is founded on Professor Ralph Benjamin's pioneering work on microwave focusing.

This trial, completed in 2011, showed a diagnostic success rate of around 80 per cent and already represents a strong competitor to X-ray mammography in dense tissue. The team are aiming for a success rate of over 90 per cent.

The company is now actively raising new funding to the take the product development forward to its next stage. Mr Johnson said “much of the make-or-break technical risk has been addressed, although we will want to, and plan to, improve performance even more in some very specific areas. The challenge is now all about building an increasingly valid and impressive clinical data base that will convince the radiology community for each application we choose to target.”