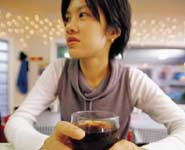 New research by academics at the universities of Bristol and Bangor has shown for the first time that overweight and obese people have a dulled sensitivity to the sweetness of soft drinks but an enhanced subconscious liking of sweet food.

The research by academics at the universities of Bristol and Bangor has shown for the first time that overweight and obese people have a dulled sensitivity to the sweetness of soft drinks but an enhanced subconscious liking of sweet food.

The findings also found that even if people are not overweight, drinking two sugary drinks a day for just four weeks is sufficient to both dull sensitivity to the taste sensation, and increase preference for sweeter tastes, particularly in people who did not already have a 'sweet tooth’.

There are health implications from the study for people who have a sweet tooth.  As the sweet ‘treat’ becomes less rewarding, so people tend to look for more sweet food or drink and a vicious circle of eating sweet and calorie-laden food is established.

When discussing soft drinks people are not considering the worst examples of sugar-laden carbonated drinks.  Levels of sugar found in fruit cordial or ‘squash’ and natural fruit juice as well as carbonated drinks are all too high in sugar and too sweet.

Dr Hans-Peter Kubis at the University of Bangor’s School of Sport, Health & Exercise Sciences, who led the study, said: “This has serious implications for public health.  This research shows how little sweet food stuffs are required to actually change your taste perceptions and how powerful sweet tasting products are.

“We are heading for a multi-level health disaster with rising obesity levels and the increasing incidence of type 2 diabetes.  From our research it is clear to see how this situation may have created a cycle of sweet food and drink consumption. As taste satisfaction levels drop; the more sweet foods are consumed, contributing to these problems.”

Dr Lucy Donaldson at the University of Bristol's School of Physiology and Pharmacology, said: “We have known for some time that the way that we perceive different tastes can change under different circumstances. This finding, that a couple of sweet drinks a day over a short time can dramatically change taste, was a real surprise.”

Dr Kubis’ opinion is that this problem needs addressing at a national level, adding: “My reaction would be to encourage the government to consider taxing sugar that is added to foodstuffs and have that tax ring fenced for the health budget.”

The results were based on experiments carried out at Bangor University’s School of Sport, Health and Exercise Science in collaboration with the University of Bristol’s School of Physiology and Pharmacology.

To test whether sweet food consumption may be responsible for these findings and to understand if it was possible to recreate the taste perception of obese people in normal weight people, those who do not usually consume sugary drinks were recruited for a second experiment.  The researchers found that in as little as four weeks it was possible to replicate the dulling of the ‘sweetness’ of sugary drinks and lessen the enjoyment just by repeated consumption.

1. The second trial involved lean people who do not normally drink sweet drinks having to drink a sugary drink that was provided, twice a day for four weeks. When re-tested for their sensitivity to and enjoyment of sweet tasting solution, their sensitivity to sweet taste and conscious enjoyment of the taste had dulled mimicking findings seen in the obese participants – though were not obese and had only been drinking the soft drinks for four weeks. Their conscious taste preference had changed in favour of a sweeter taste, though their unconscious preferences remained unchanged.

2. Sugary drinks commonly available range between 17-30 grams per 100 ml. Interestingly, the reduction in taste sensation was detected in a similar range of sugar concentration.

3. Although not covered by this particular experiment Dr Hans-Peter Kubis also explains how low or zero calorie drinks with artificial sweeteners do not necessarily provide the answer either. As people drink these, our subconscious expects a sugar and calorie laden treat, but on not ingesting these calories, people are more likely to over eat at the next opportunity to make up for the calories people were expecting to consume in the low-cal drink. This is not proven in humans, in fact there is a good argument for funding far more research in this area.