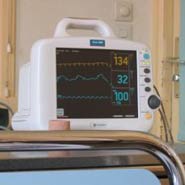 Excessive release of calcium inside cardiac muscle can cause sudden cardiac death in heart failure patients. New research has revealed how this could happen, opening up new possibilities for combating heart disease.

Calcium plays a vital role in regulating cardiac muscle contraction.  With each heartbeat, calcium is released from intracellular stores known as the sarcoplasmic reticulum (SR), through specialised channels called ryanodine receptors (RyR2). The normal trigger for this response is calcium itself, in a process known as calcium-induced calcium-release.

Experts in physiology and pharmacology from the University of Bristol conducted a series of tests which showed that a protein called protein kinase C (PKC) can cause excessive openings of these RyR2 channels, causing too much calcium to be released into the cardiac muscle.

Reporting their findings in the Journal of Membrane Biology, the researchers describe how this excess of calcium could lead to a disturbance in the normal rhythm of the heart, referred to as arrhythmias.

Dr Rebecca Sitsapesan, Reader in Pharmacology from Bristol University, explained: “Our findings reveal a novel mechanism for opening calcium channels inside heart cells. We show that a protein called PKC can disrupt the normal behaviour of the calcium channels, causing excessive openings at the wrong time. This new information will help us to design treatments that can prevent this occurring and help in the fight against heart disease.

“Our experiments measure the opening and closing of single calcium channels. We have been able to show that PKC changes the way in which the calcium channels open and this may be one of the reasons why too much calcium is released in heart cells at the wrong time and why patients with heart failure are at risk of sudden cardiac death.”

This research was funded by the British Heart Foundation.