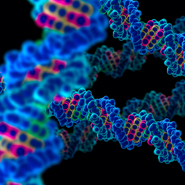 Scientists have discovered how a network of repair proteins enables bacteria to prioritise the repair of the most heavily used regions of the DNA molecules that carry the instructions necessary for living cells to function.

Scientists have discovered how a network of repair proteins enables bacteria to prioritise the repair of the most heavily used regions of the DNA molecules that carry the instructions necessary for living cells to function.

The research, carried out by academics at the University of Bristol and published in Molecular Cell (Dec. 2010), reveals that there are greater similarities between the DNA repair systems of bacteria and humans than had been suspected.

When the chemical “letters” in a cell's DNA book of instructions are damaged the instructions become difficult to read and the cell may not function properly. For example, exposure to too much sunshine increases the risk of skin cancer because the ultraviolet light present in sunshine damages the DNA in skin cells and can cause them to grow in an abnormal way.

Because it is impossible to avoid DNA damage, cells have evolved many mechanisms for repairing their damaged genomes. Like council crews repairing damaged roads these DNA repair mechanisms employ individuals with different specialities: sometimes all that is needed is a small patch on the DNA, like filling in a pothole, other times large sections of the DNA need to be removed entirely and replaced.

A team led by Dr. Nigel Savery from the DNA-Protein interactions Unit in the University of Bristol's School of Biochemistry has purified each of the many individual components of this "transcription-coupled" DNA repair pathway from the bacterium Escherichia coli and rebuilt the system in a test-tube. This allowed them to investigate the effects of disabling different parts of the different machines and hence to work out what is required to prioritise certain sections of DNA for repair. The team found that different proteins take responsibility for spotting damage in different situations, and explained how one of the central machines is able to turn itself off when it is not working, in order to decrease the "fuel consumption" of the system.

Dr Savery said: “This work is an example of "basic research", it is a fundamental study of the molecular mechanisms of an important biological function that is conserved from bacteria to man, and was begun in a spirit of scientific exploration rather than with a view to an immediate technological or medical application. However, like all basic research it provides the foundation of knowledge upon which technological and medical advances are built. In this case the work provides knowledge and experimental tools that may help to explain how this transcription-coupled DNA repair pathway, which normally prevents mutation, acts to increase the frequency with which antibiotic-resistant mutants of bacteria involved in food poisoning arise.”

The research, funded by the Biotechnology and Biological Sciences Research Council (BBSRC), was carried out by members of Dr Savery's group in the DNA:Protein Interactions Unit in the University’s School of Biochemistry.