Last Neanderthals died out 37,000 years ago 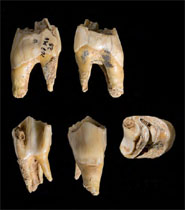 Teeth from Pego do Diabo, Portugal courtesy of PLoS ONE

The last Neanderthals in Europe died out at least 37,000 years ago – and both climate change and interaction with modern humans could be involved in their demise, according to new research from the University of Bristol published today in PLoS ONE.

The paper, by Professor João Zilhão and colleagues, builds on his earlier research which proposed that, south of the Cantabro-Pyrenean mountain chain, Neanderthals survived for several millennia after being replaced or assimilated by anatomically modern humans everywhere else in Europe.

Although the reality of this ‘Ebro Frontier’ pattern has gained wide acceptance since it was first proposed by Professor Zilhão some twenty years ago, two important aspects of the model have remained the object of unresolved controversy: the exact duration of the frontier; and the causes underlying the eventual disappearance of those refugial Neanderthal populations (ecology and climate, or competition with modern human immigrants).

Professor Zilhão and colleagues now report new dating evidence for the Late Aurignacian of Portugal, an archaeological culture unquestionably associated with modern humans, that firmly constrains the age of the last Neanderthals of southern and western Iberia to no younger than some 37,000 years ago.

This new evidence therefore puts at five millennia the duration of the Iberian Neanderthal refugium, and counters speculations that Neanderthal populations could have remained in the Gibraltar area until 28,000 years ago.

These findings have important implications for the understanding of the archaic features found in the anatomy of a 30,000 year old child unearthed at Lagar Velho, Portugal.  With the last of the Iberian Neanderthals dating to many millennia before the child was born, ‘freak’ crossbreeding between immediate ancestors drawn from distinct ‘modern’ and ‘Neanderthal’ gene pools cannot be a viable explanation.  The skeleton’s archaic features must therefore represent evolutionarily significant admixture at the time of contact, as suggested by the team who excavated and studied the fossil.

Professor Zilhão said: “I believe the ‘Ebro frontier’ pattern was generated by both climatic and demographic factors, as it coincides with a period of globally milder climate during which oak and pine woodlands expanded significantly along the west façade of Iberia.

“Population decrease and a break-up of interaction networks probably occurred as a result of the expansion of such tree-covered landscapes, favouring the creation and persistence of population refugia.

“Then, as environments opened up again for large herbivore herds and their hunters as a result of the return to colder conditions, interaction and movement across the previous boundary must have ensued, and the last of the Neanderthals underwent the same processes of assimilation or replacement that underpin their demise elsewhere in Europe five millennia earlier.”

Professor Wild, head of the 14C program at VERA (Vienna Environmental Research Accelerator) said:  “Accurate 14C dating was crucial for this study.  For layer 2 of the cave sediment we achieved this by selecting teeth for 14C dating and by comparing the 14C results of the same sample after different, elaborate sample pre-treatments.  Agreement between the results obtained with different methods provides a proof for accurate dating.”