Why a short run is better than a long walk 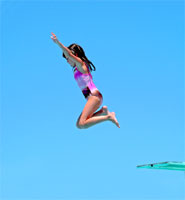 Using the latest technology, researchers from Bristol and Bath are uncovering evidence of exactly how major a role activity plays in the battle to keep obesity at bay. In new report published in the BMJ, scientists have shown that it’s the type of exercise you do, rather than the amount, that’s most important.

Building on previous work in this field from the same team, the research provides evidence that being active in childhood protects against later obesity.

The work, which uses information from the Bristol-based Children of the 90s study, suggests that making even small increases to your daily exercise routine can have dramatic long-term results  – as long as the exercise you choose is one which makes you breathless.

Using the latest cutting-edge techniques, researchers discovered that doing just 15 minutes a day of at least moderate exercise at age 12 led to 10-12% less body fat in boys and girls when they reached 14.  The proviso is that the activity has to be vigorous enough to make your child a little out a breath to be of benefit.

What makes the results particularly interesting is that it involves following the same large group of UK children who were studied at two different times – two years apart. That, and the use of high-tech equipment, provides the most accurate measures of both fat and activity levels ever achieved for a study of this type.

Researchers monitored over 4,500 children from the Children of the 90s research project (also known as ALSPAC, the Avon Longitudinal Study of Parents and Children) initially at age 12 and then again at 14. The study is based at the University of Bristol

Each child wore a special ‘Actigraph activity monitor’, which sits on a belt around the waist and records every move they made. Most wore the movement-sensitive monitor for a week but all used the Actigraph for at least three days and activity levels were monitored for a period of 10 hours a day.

They also had their body fat measured using an X-ray emission scanner, which differentiates both muscle and fat deposits in the body. This is far more precise than the usual BMI (Body Mass Index) system often used to estimate fat levels.

Heading up the research is Professor Chris Riddoch from the University of Bath together with Children of the 90s’ co-director Professor Andy Ness and his team at Bristol.

Professor Riddoch explained the significance of their results, “Although this study spans only two years, the important thing is that we have a far clearer idea of the sequence of events. It is a really important link in the chain of evidence showing that inactivity leads to obesity, rather than obesity – for example caused by overeating – leading to inactivity.

“It is the strongest suggestion yet that we need to look at how active children are, rather than automatically blaming their diet, when we wonder about why children are become overweight and obese.”