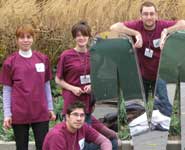 The BCCS-Bristol team at MIT 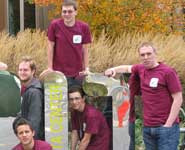 The BCCS-Bristol team at MIT

An interdisciplinary team of students at the University of Bristol went head-to-head with 111 other teams at a prestigious international competition in the field of synthetic biology – and came away with a gold medal and a prize for Best Model.

An interdisciplinary team of students from the University of Bristol went head-to-head with 111 other teams at a prestigious international competition in the field of synthetic biology – and came away with a gold medal and a prize for Best Model.

The team from the University’s Bristol Centre for Complexity Sciences (BCCS) travelled to the US to compete in the 2009 iGEM (International Genetically Engineered Machine) Jamboree at MIT (Massachusetts Institute of Technology). Having won a bronze medal and the Best Model prize at the 2008 iGEM Jamboree, this year they retained the Best Model prize and upgraded their medal to gold.

The winning team included postgraduate and undergraduate students and staff from the BCCS, the School of Biological Sciences and the Departments of Biochemistry and Engineering Mathematics, as well an outstanding foreign student who paid his own way to come to Bristol and work with the team after hearing of their 2008 success.

The BCCS-Bristol team’s 2009 project, ‘Vesecure’, aims to improve communication between bacteria by developing new methods of packaging signals – a technique that could potentially play a role in many different fields including drug delivery. The team created tools to put signals into parcels called outer membrane vesicles (OMVs), enabling multiple signals to be delivered simultaneously. They used computer modelling to demonstrate this, and developed laboratory tools for the packaging of signals – tools that may have much broader applications in the future.

One of the team’s instructors, Dr Nigel Savery from the Department of Biochemistry, said: ‘The interdisciplinary nature of the work, the opportunity for the students to define the research topic themselves, the requirement to conduct the research within the constraints laid down by iGEM, and the knowledge that at the end of it all they would be presenting their work to a large international audience – all this meant that they had to “grow up” scientifically far faster than they would in a more conventional lab placement.

‘Synthetic Biology is an emerging area that is going to need people with an unusually broad training and attitude,’ said Dr Savery. ‘The continued success of the iGEM team, together with a number of research grants awarded to investigators at Bristol recently, suggests that this will be one of the prime places for tomorrow’s synthetic biologists to train.

There is an opportunity to join the 2010 iGEM team. We are already looking for undergraduate members for the 2010 Bristol iGEM team. If you are a Bristol undergraduate with a strong academic record in either life science, mathematics, or computer science, and think you might be interested, please send a message as soon as possible to iGEM.

The mission of MIT is to advance knowledge and educate students in science, technology, and other areas of scholarship that will best serve the nation and the world in the 21st century.
Please contact Caroline Clancy for further information.