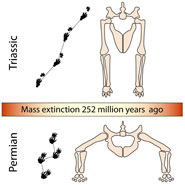 Reptile posture before and after the mass extinction. © Simon Powell 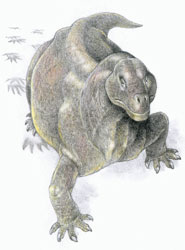 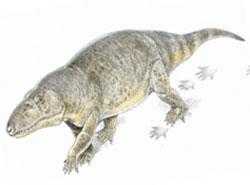 Reptiles changed their walking posture from sprawling to upright immediately after the end-Permian mass extinction, the biggest crisis in the history of life that occurred some 250 million years ago and wiped out 90% of all species.

Reptiles changed their walking posture from sprawling to upright immediately after the end-Permian mass extinction, the biggest crisis in the history of life that occurred some 250 million years ago and wiped out 90% of all species.

In a detailed study of 460 fossil tracks of reptiles from below and above the extinction boundary, Tai Kubo and Professor Mike Benton from the University of Bristol have found that before the Permian extinction all the reptiles moved with their arms and legs held sideways in a sprawling posture, just like salamanders and lizards do today.

After the mass extinction, the medium-sized and large reptiles of the subsequent Triassic period, walked with their legs tucked underneath their bodies, just like modern mammals.

Professor Benton said “Dinosaurs – and later the mammals – owe their success to being upright.  An upright animal, like an elephant or a Diplodocus, can also be very large because its weight passes directly through the pillar-like legs to the ground.  In addition, other upright animals, such as monkeys, could use their arms for climbing or gathering food.”

Walking upright can have great advantages – it means the stride can be longer and the animal can move with much less stress on the knee and elbow joints. Upright walking was the key to the success of the dinosaurs, which originated 25 million years after the great end-Permian crisis.  The first dinosaurs were all bipeds and they also became very large. Sprawlers cannot become too big or their legs collapse.

Up to now, the transition from a sprawling to an upright posture was seen as long-term, possibly lasting some 20-30 million years, but the new evidence suggests that the event was much more rapid, and was perhaps initiated by the mass extinction crisis.

This new understanding shifts the evolutionary assumptions as well.  “If the replacement of sprawlers by upright animals had been a long drawn-out affair, then we’d be looking at some process of competitive replacement,” said Professor Benton.

“As it is, the new footprint evidence suggests a more dramatic pattern of replacement, where the sprawling animals that dominated Late Permian ecosystems nearly all died out, and the new groups that evolved after the crisis were upright.  Any competitive interactions were compressed into a short period of time.”

The results are published today in Palaeontology.

All text, images and other content on this website are copyright of the University. You are required to seek permission from the University to reproduce it.