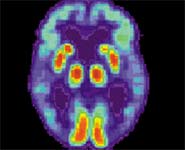 PET scan of a human brain with Alzheimer's disease US National Institute on Aging, Alzheimer's Disease Education and Referral Center

Researchers have discovered that the enzyme, endothelin converting enzyme-2 (ECE-2), may cause the decrease in blood flow in the brain seen in Alzheimer’s disease and contribute to progression of the disease.

Researchers have discovered that the enzyme, endothelin converting enzyme-2 (ECE-2), may cause the decrease in blood flow in the brain seen in Alzheimer’s disease and contribute to progression of the disease.

The study by Jennifer Palmer, BRACE/Reverend Williams PhD Scholar and colleagues at the University of Bristol’s Dementia Research Group is published in the current issue [July 2009] of the American Journal of Pathology.

Alzheimer’s disease is the most common form of dementia, affecting over half a million people in the UK - a figure expected to double in the next 20 years. Aβ peptide, which accumulates in the brain of Alzheimer’s disease patients, is thought to lead to narrowing of the blood vessels and reduction of blood flood in the brain. ECE-2 may contribute to the disease by converting an inactive precursor to endothelin-1, which constricts blood vessels and further reduces blood flow.

Jennifer Palmer said: “Our findings raise the possibility that drugs that can block the actions of endothelin-1 and which are already licensed for treating other diseases may also be of benefit for the treatment of Alzheimer’s disease.”

Much of the funding for Jennifer Palmer’s work comes from Bristol-based charity BRACE. The charity’s Chief Executive, Mark Poarch added: “This is real progress and opens up new areas for research. It is also good news for the thousands of local people who have raised money to try to beat Alzheimer’s.  BRACE is stepping up its fundraising to help scientists press on and find a cure.”

The increase in ECE-2 in Alzheimer’s disease is not simply a by-product of nerve cell damage.  When the researchers looked at brain tissue from patients with a different type of dementia (vascular dementia), ECE-2 levels were normal – no different from the levels in brain tissue from elderly people without dementia.  Further studies showed that the increase seen in Alzheimer’s disease of ECE-2 could not be explained by differences in age, gender or time to brain removal after death between the various groups of patients that were studied.

To investigate why ECE-2 might be specifically elevated in Alzheimer’s disease, the researchers then examined nerve cells that were grown in a laboratory. They showed that addition of Aβ caused these nerve cells to increase their production of ECE-2.  The findings indicate that nerve cells produce more ECE-2 when they are exposed to Aβ.

In the normal brain, blood flow responds to nerve cell activity. If nerve cell activity in a particular part of the brain increases, so does the supply of blood that is needed to meet the extra demand for nutrients such as glucose and oxygen. If this demand is not met, as can happen in Alzheimer’s disease, the nerve cells may not function normally and may even sicken and die.

Although the elevated ECE-2 in Alzheimer’s disease may help to break down amyloid beta, it may also cause the decrease in blood flow in the brain, through the production of too much endothelin-1. This may have important implications for treatment. Drugs are available that can block the actions of endothelin-1 and which have been shown to treat some other diseases in which excess endothelin-1 reduces blood flow. The findings raise the possibility that these drugs may also be of benefit for the treatment of Alzheimer’s disease.

The Dementia Research Group is headed by Dr Patrick Kehoe and Professor Seth Love and is focused on the molecular epidemiology and pathogenesis of Alzheimer’s disease and related dementias. The Group’s research programme translates a number of interwoven research themes using molecular genetic, biochemical, cell culture-based and neuropathological approaches to the study of dementia. The Research Group is part of the University of Bristol’s Department of Clinical Science at North Bristol (CSNB) and is based in the John James Laboratories at Frenchay Hospital.

BRACE (Bristol Research into Alzheimer’s and Care of the Elderly), formed in 1987, is one of a small number of charities solely dedicated to raising funds for vital research and, just as importantly, raising public awareness of the disease and the need for medical and scientific research in four main areas:

· How the brain works, in order to understand more clearly what has gone wrong in someone with dementia.
· Development of effective and accurate means of diagnosing the condition as early as possible.
· Finding new treatments and assessing their effectiveness in clinical trials.
· Investigating the potential link between certain genes in our DNA (the information we carry in each cell in our body) and the chances of developing dementia.