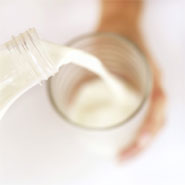 Suggestive evidence points to the possibility that children who have a diet high in calcium and who consume dairy products may have a lower mortality rate than those who don’t, according to a study by researchers in Bristol and Brisbane, published in the journal Heart.

A 65-year follow up of a study into the eating habits of families carried out in the 1930s found that dairy products and diet high in calcium made a difference to how long people lived.

Heart disease risk factors and thickening of the arteries begins in childhood and existing evidence into what effect dairy consumption has, is limited. Some dairy products such as whole milk, butter and cheese have a high content of saturated fatty acids and cholesterol and some studies indicate that consumption of these in adulthood contributes to heart disease.

Although the practice of giving extra milk to school children has been common in Europe since the 20th century, debate continues over the long term health effects of doing so and what are safe intake levels.

Researchers from the Queensland Institute of Medical Research, Brisbane, Australia, and the Department of Social Medicine at the University of Bristol, carried out a 65-year follow-up of a study done in the 1930s.

In 1937-39, children from 1,343 families in England and Scotland took part in a study of family food consumption assessed from 7-day household food inventories. The data came from the Carnegie (“Boyd Orr”) survey of diet and health in pre-war Britain.

The researchers found that there was no clear evidence that intake of dairy products was associated with coronary heart disease or stroke deaths.

However, childhood calcium intake was inversely associated with stroke mortality but not heart disease mortality.

Children who were in the group that had the highest calcium intake and dairy product consumption were found to have lower mortality rates than those in the lower intake groups.

The authors conclude: “Children whose family diet in the 1930s was high in calcium were at reduced risk of death from stroke. Furthermore, childhood diets rich in dairy or calcium were associated with lower all-cause mortality in adulthood. Replication in other study populations is needed because other factors, such as socioeconomic differences, explains part of these findings.”