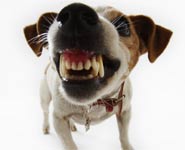 A new study shows how the behaviour of dogs has been misunderstood for generations: in fact using misplaced ideas about dog behaviour and training is likely to cause rather than cure unwanted behaviour.

A new study shows how the behaviour of dogs has been misunderstood for generations: in fact using misplaced ideas about dog behaviour and training is likely to cause rather than cure unwanted behaviour.  The findings challenge many of the dominance related interpretations of behaviour and training techniques suggested by some TV dog trainers.

Contrary to popular belief, aggressive dogs are NOT trying to assert their dominance over their canine or human “pack”, according to research published by academics at the University of Bristol’s Department of Clinical Veterinary Sciences in the Journal of Veterinary Behavior: Clinical Applications and Research.

The researchers spent six months studying dogs freely interacting at a Dogs Trust rehoming centre, and reanalysing data from studies of feral dogs, before concluding that individual relationships between dogs are learnt through experience rather than motivated by a desire to assert “dominance”.

The paper “Dominance in domestic dogs – useful construct or bad habit?” reveals that dogs are not motivated by maintaining their place in the pecking order of their pack, as many well-known dog trainers preach.

Far from being helpful, the academics say, training approaches aimed at “dominance reduction” vary from being worthless in treatment to being actually dangerous and likely to make behaviours worse.

Instructing owners to eat before their dog or go through doors first will not influence the dog’s overall perception of the relationship – merely teach them what to expect in these specific situations.  Much worse, techniques such as pinning the dog to the floor, grabbing jowls, or blasting hooters at dogs will make dogs anxious, often about their owner, and potentially lead to an escalation of aggression.

Dr Rachel Casey, Senior Lecturer in Companion Animal Behaviour and Welfare at Bristol University, said:  “The blanket assumption that every dog is motivated by some innate desire to control people and other dogs is frankly ridiculous.  It hugely underestimates the complex communicative and learning abilities of dogs. It also leads to the use of coercive training techniques, which compromise welfare, and actually cause problem behaviours.

“In our referral clinic we very often see dogs which have learnt to show aggression to avoid anticipated punishment. Owners are often horrified when we explain that their dog is terrified of them, and is showing aggression because of the techniques they have used – but its not their fault when they have been advised to do so, for example by unqualified ‘behaviourists’ recommending such techniques.”

At Dogs Trust, the UK’s largest dog welfare charity, rehoming centre staff see the results of misguided dog training all the time.  Veterinary Director Chris Laurence MBE, added: “We can tell when a dog comes in to us which has been subjected to the ‘dominance reduction technique’ so beloved of TV dog trainers.  They can be very fearful, which can lead to aggression towards people.

“Sadly, many techniques used to teach a dog that his owner is leader of the pack is counter-productive; you won’t get a better behaved dog, but you will either end up with a dog so fearful it has suppressed all its natural behaviours and will just do nothing, or one so aggressive it’s dangerous to be around.”

The paper: ‘Dominance in domestic dogs – useful construct or bad habit? by John W. S. Bradshaw, Emily J. Blackwell, Rachel A. Casey. Journal of Veterinary Behavior: Clinical Applications and Research, Volume 4, Issue 3, Pages 109-144 (May-June 2009). The academics would like to thank Claire Cooke and Nicola Robertson for permission to describe their study of freely interacting dogs, Dogs Trust for providing access to a group of dogs. Support for academic posts from the Waltham Centre for Pet Nutrition, RSPCA and Cats Protection is also acknowledged.
Please contact Joanne Fryer for further information.