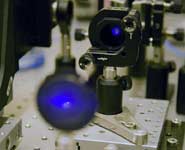 A team of physicists at the University of Bristol and Imperial College London have harnessed the phenomenon, ‘spooky action at a distance’, to shed light on another unusual and previously difficult aspect of quantum physics - that of distinguishing between two similar quantum devices.

The idea that far distant particles can somehow ’talk’ to each other worried Einstein so much that he called it ‘spooky action at a distance’.

Having confirmed its existence, scientists today are learning how to use this ‘spooky action’ as a helpful tool.  Now a team of physicists at the University of Bristol and Imperial College London have harnessed this phenomenon to shed light on another unusual and previously difficult aspect of quantum physics - that of distinguishing between two similar quantum devices.

In the everyday world any process can be considered as a black box device with an input and an output; if you wish to identify the device you simply apply inputs, measure the outputs and determine what must have happened in between.

But quantum black boxes are different.  Distinguishing between them is impossible using only single particle inputs because the outputs are not distinguishable: a fundamental consequence of the laws of quantum mechanics is that only very few states of a quantum particle can be reliably distinguished from one another.

The Bristol-Imperial team has shown how to get around this problem using ‘spooky action’.

Anthony Laing, PhD student in the Department of Physics, who performed the study, said: “Apart from providing insight into the fundamentals of quantum physics, this work may be crucial for future quantum technologies.

“How else could a future quantum engineer build a quantum computer if they can’t tell which circuits they have?”

The new findings have implications for our understanding of quantum mechanics as well as the emerging potential of quantum information science.

This work was performed in the Bristol Centre for Quantum Photonics led by Professor Jeremy O’Brien  as part of a collaboration with Dr Terry Rudolph at Imperial College London.

The paper in Physical Review Letters is published online ahead of print, 24 April 2009.