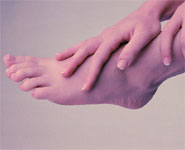 Scientists in Bristol have found that human foetal stem cells can effectively be used to treat back leg ischaemic ulcers in a model of type 1 diabetes.

Treatment of chronic wounds is a continuing clinical problem and socio-economic burden with diabetic foot ulcers alone costing the NHS £300 million a year.  Scientists in Bristol have found that human foetal stem cells can effectively be used to treat back leg ischaemic ulcers in a model of type 1 diabetes.

The researchers also found the culture in which the stem cells had been grown mimicked the wound-healing ability of the cells, suggesting that they could be used as a "factory" of wound-healing substances. Alternatively, the active ingredients in the culture, once identified, could be used instead; this would avoid the ethical concerns of using human foetal stem cells.

In humans, diabetic patients with ischaemic foot ulcers have the worst outcome of all chronic skin wounds, with higher amputation and mortality rates than patients carrying non-ischaemic ulcers.  Topical gels containing single growth factors have recently been used with some success in non-ischaemic ulcers, but have been unsuccessful in ischaemic ulcers, which are also resistant to other conventional treatment.  Ischaemia results when the blood supply to a tissue is greatly reduced or stopped - this can occur in diabetes since it can also cause impaired blood flow in patients.

The healing activity of stem cells is recognised for their ability to separate into the various component cells of injured tissues, as well as to discharge growth factors that may encourage the formation of new blood vessels in the patient.

Foetal stem cells possess a better ability to multiply and to graft onto host tissue, and to separate into other cell types to replace those in the damaged tissue.  The group led by Bristol University's Professor Madeddu have found that foetal stem cells accelerate the closure of ischaemic diabetic ulcers, while stem cells from blood of adult donors are ineffective.

Professor Madeddu, commenting on the research, said: "This is the first study to demonstrate the healing capacity of local therapy with CD133+ stem cells in a model of diabetic ischaemic foot ulcer. The foetus-derived cells would be difficult to obtain for therapeutic applications. However, the finding that conditioned culture is also effective in stimulating wound healing may have important implications for the cure of the ischaemic complications of diabetes.

"Foetal CD133+ cells might be used in the future as a "factory" of therapeutic substances. Alternatively, synthetic replica of the conditioned medium could be produced to obviate ethical concerns surrounding the direct use of foetal stem cells."

Karen Addington, Chief Executive of Juvenile Diabetes Research Foundation (JDRF), added: "Chronic wounds and diabetic foot ulcers are serious long-term complications of type 1 diabetes.  Because of the difficulties involved in managing type 1 diabetes, people living with the condition are at an increased risk of requiring a non-traumatic limb amputation. Although more work needs to be done before we can begin to think about potential new treatments, this research represents a useful way to help identify new strategies for dealing with type 1 diabetes."

The researchers discovered that a particular type of stem cell - CD133+ cells (derived from human foetal aorta) promoted blood vessel formation in order to salvage the diabetic limb.  Three days following the graft consisting of collagen plus CD133+ cells, hardly any CD133+ cells were detected in the ischaemic diabetic ulcer - indicating that transplanted cells had done their task in the very first days after transplantation possibly by boosting the generation of new vessels through an indirect mechanism.

They found that the CD133+ cells released large amount of growth factors and cytokines endowed of pro-angiogenic and pro-survival potential. To confirm the importance of these released factors, Professor Madeddu and colleagues have grown the CD133+ cells in vitro, and then used the "conditioned" culture to reproduce the effects on wound healing and angiogenesis. These additional experiments confirmed that wound healing and angiogenesis are equally benefited either by giving stem cells or the stem cells' released product.

In the attempt to explain which component of the healing cocktail were really important, they withdrew likely candidates one by one by blocking antibodies. Interestingly, they found that the vascular endothelial growth factor A (VEGF-A) and some interleukins were the crucial factors accounting for the healing effect of transplanted stem cells.

Importantly, VEGF-A was recognized to be the responsible for reactivation of foetal genes, belonging to the Wingless gene family, in the wounded tissue.  Withdrawal of wingless gene products also prohibited the beneficial action of conditioned medium on the wound closure and reparative angiogenesis.

This discovery provides a new perspective in the use of foetal stem cells.  It is known that wounds heal so well in foetuses that no scar can be visible at birth.  It is therefore possible that, when foetal stem cells are transplanted onto diabetic ulcers, they reactivate a foetal program in the recipient to allow those adult ulcers to repair as efficiently as foetal wounds do.

The Bristol Heart Institute consists of over 200 researchers and clinicians in the University of Bristol and University Hospitals Bristol NHS Foundation Trust. As well as improving collaboration between scientists and clinicians within the Institute, the aim is to communicate research findings to the public.  www.bristol.ac.uk/bhi/

The British Heart Foundation (BHF) is the nation's heart charity, dedicated to saving lives through pioneering research, patient care, campaigning for change and by providing vital information. But we urgently need help. We rely on donations of time and money to continue our life-saving work. Because together we can beat heart disease.   www.bhf.org.uk/

The study was supported by a 7th framework programme grant of the European Community (RESOLVE) and project grants of the Juvenile Diabetes Research Foundation and the British Heart Foundation (BHF).