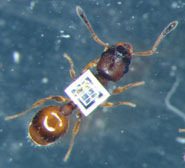 Direct comparison of alternatives isn’t always the best way to make a decision – at least if you’re an ant. House-hunting rock ants collectively manage to choose the best nest-site without needing to study all their options, according to new research from the University of Bristol.

Dr Elva Robinson and colleagues in the University’s School of Biological Sciences fitted rock ants (Temnothorax albipennis)  with tiny radio-frequency identification tags, each measuring 1 / 2,000 (one two-thousandth) the size of a postage stamp, then observed as they chose between a poor nest nearby and a good nest further away.

The ant colonies showed sophisticated nest-site choice, selecting the superior site even though it was nine times further away than the alternative.  The best nest was chosen, despite the fact that very few individual ants made direct comparisons between the nest-sites.

When a colony of rock ants needs to emigrate to a new nest, scouting ants first discover new nests and assess them then the scouts recruit nest-mates to the new nest using tandem-running, where an informed ant leads a second ant to her destination.  When the number of ants in the new nest reaches a quorum, scouts begin rapid transport of the rest of the colony by carrying nest-mates and brood.

Dr Robinson said: “Each ant appears to have its own ‘threshold of acceptability’ against which to judge a nest individually.  Ants finding the poor nest were likely to switch and find the good nest, whereas ants finding the good nest were more likely to stay committed to that nest.  When ants switched quickly between the two nests, colonies ended up in the good nest.   Individual ants did not need to comparatively evaluate both nests in order for the entire colony to make the correct decision.

“On the other hand, animals – including humans – who use comparative evaluation frequently make ‘irrational’ decisions, due to the context in which options are compared or by inconsistently ranking pairs of options, (for example option A preferred to B, B preferred to C but C preferred to A).

“The ants’ threshold rule makes an absolute assessment of nest quality that is not subject to these risks, and circumvents the necessity for memorization and comparison of every site visited.  Thus, simple individual behaviour substitutes for direct comparison, facilitating effective choice between nest sites for the colony as a whole.”