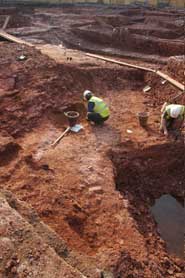 Archaeologists from Bristol’s Museum and Art Gallery, working in advance of redevelopment at the University of Bristol, have uncovered the remains of one of the most significant fortifications from the English Civil War (1642-53): the Royal Fort, located on a hill overlooking the City of Bristol.

For many years, considerable doubt has surrounded the Fort’s exact location, as it was largely destroyed in the seventeenth and eighteenth centuries, and the few remains that survived were turned into landscape gardens by Humphry Repton in 1804.

The University conducted excavations in 2001 but the Fort’s five main bastions and ditches were not located.  Now, as a result of an eight-week excavation on the summit of St Michael’s Hill by the Bristol’s Museum and Art Gallery archaeologists, a defence ditch around two bastions and possibly the foundations for a fortification wall have been found.

Parts of what appear to be a seventeenth-century building – possibly a Civil War-period barrack block or powder store – were also discovered along with artefacts from the Civil War including a cannonball, a lead cap from a gunpowder pouch and numerous clay tobacco pipes.

Bruce Williams, Manager of Bristol and Region Archaeological Services (BaRAS) who directed the project said: “Bristol played a prominent role in the English Civil War although the legacy of this is not so apparent within the modern cityscape.  In addition to the remains of the Royal Fort, it is delightful to find distinguishing objects such as cannonballs that can without doubt be attributed to the Civil War period.”

Mark Horton, Professor in Archaeology at Bristol University, who conducted the 2001 excavations commented: “This is a thrilling find and allows us finally to pin down the exact spot for the fort.  Archaeologists of the English Civil War will now have to take notice of the Royal Fort, one of the very few purpose-built fortresses constructed, rather than reusing medieval castles and the like.”

The Royal Fort had a comparatively short life.  Designed by Sir Bernard de Gomme, one of the greatest military engineers of his time, it was planned not only to defend Bristol, but also to serve as the western headquarters for the Royalist Army, under Prince Rupert.

The Fort was built over a smaller Parliamentary fortification, known as the 'Windmill Hill Fort', after Prince Rupert had been installed as governor of Bristol in August 1643 following the capture of the City by the Royalist Army.

The Fort remained in Royalist hands until September 1645, when it was surrendered, along with the City, to Oliver Cromwell and his New Model Army.  According to Cromwell, it then had victuals for 150 men for 320 days. The Parliamentary army may have added to the defences, but these were demolished on Cromwell’s orders in 1655-6.

Although a number of 'gentry' houses were constructed on the site in the second half of the seventeenth century, a magnificent mansion – Royal Fort House – was later built, in 1761, for Thomas Tyndall and occupied by the Tyndall family until 1916 when it came into the possession of the then recently-founded University of Bristol, along with the surrounding land.

The H. H. Wills Physical Laboratory (now Grade II-listed) was built opposite in the mid-1920s and the University has continued to grow around Royal Fort ever since.  This, the University’s centenary year, will see work commence on a new Mathematics and Bioscience block on the land.

The new £80 million development will be built on part of the old Children’s Hospital site on the corner of St Michael’s Hill and Tyndall Avenue.  It consists of two striking new buildings housing research and teaching facilities for the School of Biological Sciences and the Department of Mathematics, as well as improvements to the public realm, including a new route into Royal Fort Garden from St Michael’s Hill.  The circular drum-shaped Department of Mathematics will be located within a new landscaped courtyard, adjacent to the listed H H Wills Physics Building, while the new Biological Sciences accommodation will be a dramatic five-bay building fronting St Michael’s Hill.

The project was co-ordinated by the University’s Estates Office, working with a consultant team including Sheppard Robson Architects, CSJ Planning Consultants, Nicholas Pearson Associates and Capita Symonds.  Planning approval for the development was given unanimously by Bristol City Council on 8 April.