Pedigree dog breeding in the UK: a major welfare concern? 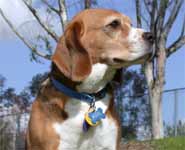 A six-year old female purebred beagle of the tricolour variety

Urgent action is needed to safeguard the welfare of pedigree dogs, according to a new independent scientific report commissioned by the RSPCA.

Urgent action is needed to safeguard the welfare of pedigree dogs, according to a new independent scientific report commissioned by the RSPCA. The Society is now calling for a summit of key stakeholders to discuss the way forward. 1

The independent report, written by Dr Nicola Rooney, a research associate at the University of Bristol and Dr David Sargan, a senior lecturer at the University of Cambridge Veterinary School, concludes that exaggerated physical features and inherited diseases cause serious welfare problems in pedigree dogs.

Because each breed has its own problems there is unlikely to be one cure-all solution. However, the authors have suggested a number of possible ways forward. The four measures considered to be of greatest priority are:

Mark Evans, the RSPCA’s chief veterinary adviser, said: “I hope this independent report will be seen as a constructive contribution to the debate and that it stimulates discussion amongst everyone involved in order to identify practical, evidence-based solutions that really make a difference.

“The RSPCA recognises that finding remedies for the many problems facing pedigree dogs is a difficult, complex challenge. But that isn’t an excuse to shy away from it – the fact is pedigree dogs need our help and they need it now.”

Commissioned by the RSPCA, Pedigree Dog Breeding in the UK: A Major Welfare Concern? is a review of the relevant science and has been compiled by highly respected scientists, vets and dog welfare experts3 who also propose possible ways of improving pedigree dog welfare.

Steps are already being taken to carry out the recommendation deemed most urgent by the report authors – the systematic collection of data on inherited diseases suffered by dogs.

The RSPCA is working with the University of Sydney and the Royal Veterinary College on a three-year research project to create a new, electronic, system for collecting, analysing and reporting data on inherited disorders in both dogs and cats. When complete, for the first time in the UK there will be comprehensive data to show the prevalence of inherited disorders in specific breeds. This will allow the effectiveness of any new breeding initiatives to be monitored.

The RSPCA is extremely concerned about the unacceptably high levels of disability, deformity and hereditary disease affecting these animals, as is the public, following the BBC documentary Pedigree Dogs Exposed which sparked a national debate on the issue.

1. The RSPCA is calling for a summit of key stakeholders to take place once the APGAW (Associate Parliamentary Group for Animal Welfare) enquiry is complete.

2. The RSPCA welcomes the fact that the Kennel Club recently announced that it will no longer register puppies whose parents are closely related. However, the Kennel Club has defined close relative matings as those between mother and son, father and daughter or brother and sister. The authors of the RSPCA-commissioned report went one step further and recommend that grandparent and offspring and half siblings should also no longer be mated.

3. The report was written by:

- Dr Nicola Rooney, a research associate at the University of Bristol. She has a PhD in dog behaviour and for the past nine years has managed a research programme on working dog ability and welfare.

- Dr David Sargan, a senior lecturer at the University of Cambridge Veterinary School and a comparative geneticist with special interests in canine genetic diseases. He curates the database Inherited Diseases in Dogs, and has produced a number of DNA based tests for canine inherited diseases.

The following experts also contributed to the report:

- Dr Matthew Pead, a senior lecturer in surgery at the Royal Veterinary College. He has more than 15 years experience in treating bone and joint conditions in pedigree dogs. He was part of the team that set up the British Veterinary Association/Kennel Club elbow screening scheme.
- Dr Carri Westgarth, a research associate at Liverpool University. She has a BSc in zoology and genetics, and a PhD in veterinary epidemiology. She works as a consultant in animal behaviour, instructs dog training classes, lectures, and carries out post-doctoral research into the human-companion animal bond.
- Dr Emma Creighton, a senior lecturer in animal behaviour and welfare at the University of Chester. She specialises in human-animal interactions and the welfare of companion animal species.
- Dr Nick Branson is the animal welfare officer at Deakin University in Australia. He completed a doctorate by research in applied canine behaviour and neuroscience and has spent over ten years in private veterinary practice.