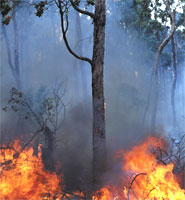 New data, published today, disproves the recent theory that a large comet exploded over North America 12,900 years ago, causing a shock wave that travelled at hundreds of kilometres per hour and triggering continent-wide wildfires.

New data, published today, disproves the recent theory that a large comet exploded over North America 12,900 years ago, causing a shock wave that travelled at hundreds of kilometres per hour and triggering continent-wide wildfires.

Dr Sandy Harrison from the University of Bristol and colleagues tested the theory by examining charcoal and pollen records to assess how fire regimes in North America changed between 15 and 10,000 years ago, a time of large and rapid climate changes.

Their results provide no evidence for continental-scale fires, but support the fact that the increase in large-scale wildfires in all regions of the world during the past decade is related to an increase in global warming.

Dr Harrison said, “Fire is the most ubiquitous form of landscape disturbance and has important effects on climate through the global carbon cycle and changing atmospheric chemistry. This has triggered an interest in knowing how fire has changed in the past, and particularly how fire regimes respond to periods of major warming.

“The end of the Younger Dryas, about 11,700 years ago, was an interval when the temperature of Greenland warmed by over 5°C in less than a few decades. We used 35 records of charcoal accumulation in lake sediments from sites across North America to see whether fire regimes across the continent showed any response to such rapid warming.”

The team found clear changes in biomass burning and fire frequency whenever climate changed abruptly, and most particularly when temperatures increased at the end of the Younger Dryas cold phase. The results are published today [26 January] in the Proceedings of the National Academy of Science.

Understanding whether rapid changes in climate have caused wild fires in the past will help understand whether current changes in global temperatures will cause more frequent fires at the present time. Such fires have a major impact on the economy and health of the population, as well as feeding into the increase in global warming.