Cooling the planet with crops 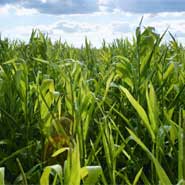 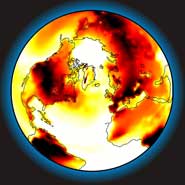 The predicted temperature increase at the end of the century, caused by a doubling of current CO2 levels. White = 2 degrees C (or less) to black = 8 degrees C (or more). 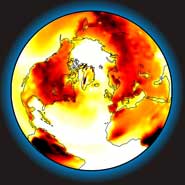 By carefully selecting which varieties of food crops to cultivate, much of Europe and North America could be cooled by up to 1°C during the summer growing season, say researchers from the University of Bristol.

By carefully selecting which varieties of food crops to cultivate, much of Europe and North America could be cooled by up to 1°C during the summer growing season, say researchers from the University of Bristol. This is equivalent to an annual global cooling of over 0.1°C, almost 20% of the total global temperature increase since the Industrial Revolution.

The growing of crops already produces a cooling of the climate because they reflect more sunlight back into space, compared with natural vegetation. Different varieties of the same crop vary significantly in their solar reflectivity (called ‘albedo’), so selecting varieties that are more reflective will enhance this cooling effect. Since arable agriculture is a global industry, such cooling could be extensive.

Reporting today [15 January] in Current Biology, Dr Andy Ridgwell and colleagues at the University of Bristol argue that we should select crop varieties in order to exert a control on the climate, in the same way that we currently cultivate specific varieties to maximize and fine-tune food production.

Dr Ridgwell said: “We have evaluated the effect of our approach in a global climate model. By choosing from among current crop varieties, our best estimate for how much reflectivity might be increased leads us to predict that summer-time temperatures could be reduced by more than 1°C throughout much of central North America and mid-latitude Eurasia. Ultimately, further regional cooling of the climate could be made through selective breeding or genetic modification to optimise crop plant albedo.”

The team emphasised that unlike growing biofuels, such a plan could be achieved without disrupting food production, either in terms of yield or the types of crops grown. “We propose choosing between different varieties of the same crop species in order to maximize solar reflectivity rather than changing crop type, although the latter could also produce climatic benefits,” explained Ridgwell.

Over the next hundred years, making these kinds of decisions would be equivalent to averting the carbon footprint of 195 billion tonnes of CO2 emitted into the atmosphere. Farmers could be encouraged to grow such crops by issuing them with carbon credits. Ridgwell has calculated that if such a mechanism were in place farmers might expect to earn in the region of 23 euros per hectare per year for the warming averted. Biofuels currently earn 45 euros per hectare per year, but take up valuable agricultural land needed for growing crops.

Plants differ in their albedo because of differences in the properties of the leaf’s surface and how the leaves are arranged (called ‘canopy morphology’). The team therefore propose that the varieties grown should be chosen for their reflective properties alongside other considerations already made when planting crops, such as the food processing characteristics of a grain.

Since society has so far remained unwilling to make the drastic reductions in fossil fuel use needed to cut carbon dioxide emissions, simple alternatives such as growing more reflective crops are a realistic way of helping reduce the severity of heat waves and droughts in these regions. Results could be achieved very quickly and at very little cost.

“There is a clear need for more research into characterising the variability in albedo that currently exists between the different variants and strains of common crop plants,” commented Ridgwell. “We are applying for funding that will enable us to better quantify what is possible now, what variability there is for future selective breeding, and whether there is a need for genetic modification in the future”.