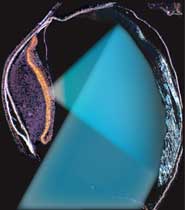 Section through the diverticulum eye showing the way incoming light from a distant light source is imaged.

View of a spookfish from above

A remarkable new discovery shows the four-eyed spookfish to be the first vertebrate ever found to use mirrors, rather than lenses, to focus light in its eyes.

A remarkable new discovery shows the four-eyed spookfish to be the first vertebrate ever found to use mirrors, rather than lenses, to focus light in its eyes.

Professor Julian Partridge from the University of Bristol, said: “In nearly 500 million years of vertebrate evolution, and many thousands of vertebrate species living and dead, this is the only one known to have solved the fundamental optical problem faced by all eyes – how to make an image – using a mirror.”

While the spook fish looks like it has four eyes, in fact it only has two, each of which is split into two connected parts. One half points upwards, giving the spookfish a view of the ocean – and potential food – above. The other half, which looks like a bump on the side of the fish’s head, points downwards into the abyss below. These ‘diverticular’ eyes are unique among all vertebrates in that they use a mirror to make the image.

Although the spookfish was first discovered 120 years ago, no one had discovered its reflective eyes until now because a live animal had never been caught. When Professor Hans-Joachim Wagner from Tuebingen University caught a live specimen off the Pacific island of Tonga, members of his research team used flash photography to confirm the fish’s upward and downward gazes.

It was when looking at sections of the eye that Professor Partridge realised that the diverticular mirrors were something exciting. The mirror uses tiny plates, probably of guanine crystals, arranged into a multi-layer stack. This is not unique in the animal kingdom (it’s why silvery fish are silvery) but the arrangement and orientation of the guanine crystals is precisely controlled such that they direct the light to a focus. Partridge’s computer simulation showed that the precise orientation of the plates within the mirror's curved surface is perfect for focusing reflected light onto the fish’s retina.

The use of a single mirror has a distinct advantage over a lens in its potential to produce bright, high-contrast images. Having the ability to see moving objects at such depths could mean the difference between life and death for spookfish.

The research will be published this month in Current Biology.