The discovery of America: the revolutionary claims of a dead historian 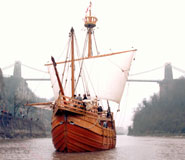 A replica of John Cabot's ship, the 'Matthew' sailing on the Avon

Extraordinary claims made by the late Dr Alwyn Ruddock that could re-write the history of the European discovery of America are explored by Dr Evan Jones in an article published today in Historical Research.

In an article published today in Historical Research, Alwyn Ruddock’s extraordinary claims are explored by Dr Evan Jones of the University of Bristol.

In Spring 2006, all Dr Ruddock’s research material was destroyed, in line with the instructions in her will.  However, her correspondence with her intended publisher, the University of Exeter Press, survived.  Using this correspondence Dr Jones has investigated the research that Dr Ruddock had worked on, and kept secret, for so many years.

"To describe Alwyn Ruddock’s claims as revolutionary," said Dr Jones, "is not an exaggeration." Her apparent findings include information about how John Cabot persuaded Henry VII to support his voyages and why the explorer was able to win the backing of an influential Italian cleric: Fr. Giovanni Antonio de Carbonariis, an Augustinian friar who was also in charge of collecting the Pope’s taxes in England.

Dr Ruddock’s most exciting claims, however, involve John Cabot’s 1498 voyage to America . While the fate of this expedition has long been a mystery, Dr Ruddock appears to have found evidence of a long and complex exploration of the American coastline, which culminated in Cabot’s return to England in the spring of 1500, followed shortly by his death. During this voyage, Dr Ruddock suggests that Cabot explored a large section of the coastline of North America, claiming it for England in the process.

Dr Ruddock intended to reveal that while Cabot was sailing south down the coast of America his chief supporter, Fra Giovanni, was establishing a religious colony in Newfoundland.  Having disembarked from his ship, the Dominus Nobiscum, Fra Giovanni apparently established a settlement and built a church. This church, the first to be built in North America, was named after the Augustinian church of San Giovanni a Carbonara in Naples.

Dr Jones said: "Ruddock’s claims about the 1498 voyage are perhaps the most exciting of all. For while we have long known that Fra Giovanni accompanied the expedition, along with some other 'poor Italian friars', nothing has been known of what happened to their mission. If Ruddock is right, it means that the remains of the only medieval church in North America may still lie buried under the modern town of Carbonear."

Dr Ruddock’s claims are clearly extraordinary but are they all correct? This is an issue that remains, in large part, to be resolved. In his article, Dr Jones shows that in many cases Alwyn Ruddock’s claims can be substantiated by reference to previously unknown material.  However, much remains to be done.

Dr Jones continued: "In publishing this article now my intent was to put into the public domain what appear to be the last vestiges of Dr Ruddock’s research.  While her correspondence does not give all the answers, it does provide many clues that historians can use to investigate her claims. I also hope that the publication of this article might persuade people who possess knowledge of Dr Ruddock’s research to come forward.  For it is clear from her correspondence that many people must possess useful knowledge, ranging from her ex-students at the British Library to the 'old and historic families in Italy' who gave her access to their private archives."

As to why Alwyn Ruddock should have chosen to have all her research destroyed on her death, Dr Jones confesses that he has no clear answers. In her obituary in the Guardian newspaper, it was suggested that she destroyed the first draft of her book "because it did not meet her exacting standards."  This does not explain, however, why she wanted everything destroyed – including her microfilms, her photographs and the transcripts of the documents she used.

"What is clear," said Dr Jones, "is that she had a great sense of possession for her work and she felt this gave her the moral right to take her secrets to the grave. But even if all the documents she claimed to have found do come to light eventually, the mystery of why she sought to suppress her own basic research may never be resolved."

An Italian version of this press release (Office document, 28kB) is available.