Around the world, predictive models are used by Volcanic Ash Advisory Centres (VAACs) to forecast ash dispersal. These forecasts inform decisions, such as airspace closures, and help governments assess the health, economic and environmental risks associated with volcanic eruptions. Yet there is considerable uncertainty associated with the source terms put into these models as the dynamics of the volcano itself during an eruption are extremely complicated.

In 2010, Professor Steve Sparks and Professor Willy Aspinall and Dr. Matt Watson, from the University of Bristol, were asked to join a Scientific Advisory Group for Emergencies (SAGE). The committee was created by the Government’s Chief Scientific Adviser, Professor Sir John Beddington, in response to the ash crisis resulting from the eruption of Eyjafjallajökull in Iceland.

“There were four meetings over several weeks as the emergency unfolded and this is where we put in quite a lot of advice,” said Sparks, European Research Council Advanced Researcher in the School of Earth Sciences. “It’s because NERC has supported my research over the past 20-30 years that I was in a position to help in this situation.”

The Bristol volcanologists provided insight into the terms being put into the Met Office’s Numerical Atmospheric-dispersion Modelling Environment (NAME), thereby reducing some of the uncertainty around forecasting.

“Their contributions were crucial to aid our understanding of the ash plume size and composition, and the processes by which the plume was transported to the UK,” said Professor Beddington. “That information was used to inform the modelling which provided maps of ash concentrations and locations for the Civil Aviation Authority.” 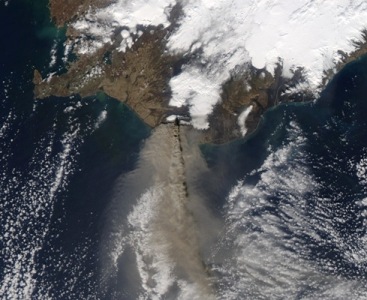 Met Office forecasts also inform other businesses affected by atmospheric ash such as helicopter operations related to the oil and gas industry and the UK energy network.

“Following the April 2010 emergency, the [Bristol experts] have continued to work with the government to improve its understanding of the risk from Icelandic volcanoes and to mitigate the impact of future eruptions,” said Professor Beddington.

As more is learned about the dynamics of volcanic eruptions, such as those in Iceland, the predictive models will evolve to incorporate these data and have greater predictive power. Accurate forecasting can have widespread economic and social benefits. During the 2010 European airspace closures, airlines lost an estimated US$1.7 billion dollars and over seven million passengers were affected.

The outcomes of the ash crisis in Europe, and the interactions that ensued as a result, have led to an extensive follow-up research program being conducted by numerous institutions across the UK, including a £530,000 Natural Environment Research Council (NERC)-funded research project into Eyjafjallajökull awarded to University of Bristol scientists. This research will continue to inform predictive models that shape policy decisions and risk assessments around the globe.

Following the April 2010 emergency, the [Bristol experts] have continued to work with the government to improve its understanding of the risk from Icelandic volcanoes and to mitigate the impact of future eruptions

The expertise in Bristol is based on a body of research advanced by NERC investment and spans more than 80 person years. It has looked at the basic physics of volcanic eruptions and has led to a solid understanding of the dynamics of volcanic plumes. An influential book, written in 1997 by Sparks and others, helped to establish the basic relationships that underlie the source terms used in predictive models utilised by many Volcanic Ash Advisory Centres (VAACs) around the world.

• The world-renowned expertise at Bristol led to the establishment of the AXA Research Fund Chair in Volcanology in 2012, which is held by Professor Katharine Cashman. (http://researchfund.axa.com/launch-of-the-axa-university-of-bristol-chair-in-volcanology)

• Stephen Sparks is a Fellow of the Royal Society and Director of the Bristol Environment Risk Research Centre (BRISK) (http://www.bristol.ac.uk/brisk/)