A novel technology that uses ultrasound waves to put feeling into touchless interfaces has applications in consumer electronics, household appliances and the car industry.

The technology uses ultrasound waves to put feeling into touchless interfaces, allowing people to interact with virtual objects with nothing but their bare hands. It was developed by Tom Carter, a graduate student in the Department of Computer Science at the time, Dr Ben Long, a post-doctoral researcher, and Professor Sriram Subramanian, then Professor of Human-computer Interaction.

To bring this exciting new technology to the marketplace, the team formed a spin-out company, Ultrahaptics, in November 2013. After hiring its first employee early in 2014, Ultrahaptics grew rapidly, expanding to 22 employees and total funding of £11.3 million within two years. This expansion is helping to meet existing demand, as well as move into new markets.

How ultrasound works with haptics

The researchers were exploring how ultrasound waves could be used to create the sense of touch (haptics). Ultrasound waves displace air, creating a pressure difference. By cleverly directing waves to the same place at the same time, a pressure difference can be perceived by the touch receptors in the hands. This can then be used to create the physical sensation of touching a button or to provide feedback when using mid-air gestures to control a device.

By early 2013, Carter, Long and Subramanian had developed a proof of concept and believed there was market potential. They received support from the Research and Enterprise Development (RED) team, who began to evaluate the intellectual property and market potential for the technology. RED provided further support through an Engineering and Physical Sciences Research Council (EPSRC) Impact Accelerator Award to develop a prototype and conduct further market research. Together, RED and the research team fleshed out a business plan, filed the first patents and started to engage with potential customers.

“This had all the components we look for with a spin-out, including an engaged academic team, large potential markets and a novel ground-breaking platform technology. Tom is a true entrepreneur and his drive and passion were key to moving this technology towards real world applications.” - Dr Matt Butcher, Research Commercialisation Manager, RED.

Support from the Bristol SETsquared Centre

In 2013, Carter won the New Enterprise Competition for the business plan for Ultrahaptics. This provided £15,000 to develop the business, but also included support and advice from the Bristol SETsquared Centre - the University's award-winning business incubator.

Ultrahaptics Ltd was spun-out of the University with Carter, Long and Subramanian as founders. RED managed the spin-out process and Butcher joined the board to help the company's formation and to engage with the network of professionals – investors, lawyers, accountants, insurers - necessary for any business.

Ultrahaptics set up an office in the SETSquared Engine Shed, hired its first employee and received investment and support from the IP Group plc. The team then worked with local designers, Kinneir Dufort, to develop an evaluation kit that enables manufacturers to try out the technology and determine its utility within their own products.

'The team grew rapidly here in the Engine Shed,' explained Nick Sturge, Director of the Bristol SETsquared Centre. 'Within a year and a half their team was taking up the biggest office space with over 20 desks. We are hugely excited to be a part of their journey.'

By late 2015 Ultrahaptics had successfully secured a £10.1m funding round led by Woodford Investment Management, alongside the IP Group. The company has ambitious plans to grow and is engaged with Tier 1 manufacturers in multiple markets.

“The support and advice from the University teams in RED and SETsquared have really helped the company to grow and to prosper,” said Carter, founder and now Chief Technical Officer of Ultrahaptics.

With the Royal Society reporting that under than 4% of PhD students will become professors or permanent research staff in universities, the University of Bristol supports alternative pathways that will ultimately lead to the next generation of entrepreneurs, innovators and business leaders.

Our Commercialisation and Impact Development team supports early assessments of the marketability of University technology, working with researchers to evaluate and protect intellectual property, conduct market evaluations and apply for proof of concept funding. They also negotiate licensing agreements and manage the spin-out process.

SETsquared is a world-leading partnership between the Universities of Bath, Bristol, Exeter, Southampton and Surrey that is helping incubate initial ideas and grow them into successful organisations. In 2015, it was ranked number one among 1,200 incubators in 64 countries. 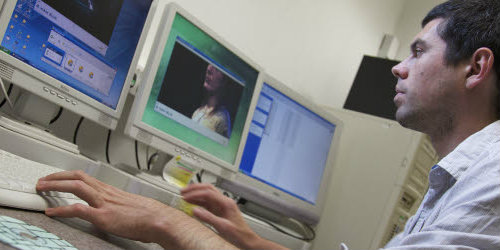 Collaborate with experts at the cutting edge of research.