The Stigmata in Medieval and Early Modern Europe 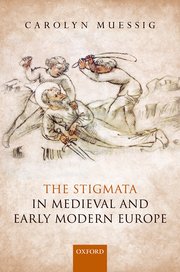 Carolyn Muessig's new book traces the birth and evolution of religious stigmata as expressed in theological discussions and devotional practices in Western Europe from late antiquity to the early seventeenth century. It also contains an introductory overview of the historiography of religious stigmata beginning in the second half of the seventeenth century to its treatment and assessment in the twenty-first century. It examines the role stigmatics played in medieval and early modern religious culture, and the way their contemporaries reacted to them. It also provides a unique exploration as to why stigmatization became a saintly ideal in pre-modern Europe, accepted by some as the ultimate proof of the possibility of human perfection, while disregarded by others as a pathetic example of humanity's ability to delude itself in its desire to touch the miraculous. Carolyn is the former Professor of Medieval Studies in the department, now (from 2020-21) at the University of Calgary.