In the mid-1990s Sri Lanka had one of the highest suicide rates in the world. In the last two decades Sri Lanka has made significant progress in reducing its suicide rate through removing the most toxic pesticides from the country (the most common method of suicide until recent years). However, suicide is still one of the leading causes of death in 15-29-year olds. The suicide rate in young people in Sri Lanka is twice that seen in high-income countries. Most suicide deaths occur in rural areas and the highest rates are in young women and older men.

Social factors are recognised as important in suicide but their role in this region is not clear. A better understanding is needed to inform suicide prevention efforts; a reduction in the suicide rate is one of the UN SDG (sustainable development goal) indicators and is a target of the WHO Mental Health Action Plan.

This research investigated the association between social factors, such as poverty, and attempted suicide risk in a large rural population in the North Central Province. A door-to-door survey of 150,000 people in 54,000 households were combined with hospital data on suicide attempts. All eligible households in the area were approached and 95% responded to the survey.

There is an urgent need for a cross-sectoral approach for reducing the suicide rate in Sri Lanka. This policy report presents the initiatives suggested by the stakeholder workshops. The recommended strategies range from reducing alcohol misuse to developing relationship and vocational skills, as well as improved mental health service provision and awareness.

We studied survey and hospital data collected from 54,000 households in Rajangana, Thambuttegama, Nottchiyagama, Talawa, Galnewa and Iplogama in the North Central Province of Sri Lanka. From this, we identified four vulnerable population subgroups at a high risk of attempted suicide. The risk of attempted suicide was double in farmers, daily wage labourers, and foreign migrant households, and significantly elevated in female headed households.

Following the survey analysis, we conducted ten stakeholder workshops with a total of 100 participants to share these findings. We engaged a wide range of stakeholders including: teachers, social workers, Grama Niladhari (village officers), foreign migration officers, community leaders/members, national government officials (Ministry of Health, Education, Social and Welfare), non-governmental agencies, researchers and charities. The stakeholders were first presented with the findings of our research which identified four vulnerable subgroups within the study population. Participants were asked to state what is likely to have contributed to the higher risk in each subgroup. Interpersonal conflicts were highlighted as one major reason why people attempt suicide.

Stakeholders commented that the people in the subgroups identified in the research were all (at some stage) connected to each other (e.g. female headed households and foreign migrant women are likely to be married to a daily wage labourer), and that many of the problems faced by one grouping were common to those experienced by the other vulnerable people. It was also clear that the factors identified were interrelated.

Based on the problems identified (see table on back page), the stakeholders recommended a wide range of possible interventions. Stakeholders considered that the combination of poor problem-solving skills and the culture of using suicide as a way of dealing with difficult situations (a ‘solution’ commonly portrayed in local media) leads to an increased risk of suicide attempts in these vulnerable people. The workshop with national representatives also highlighted the need for more orchestrated service provision.

Some of the recommendations have universal benefit to all four groups, whilst others will be of benefit to specific subgroups.

Findings and recommendations specific to groups:

Stakeholders identified the insecurity of their income coupled with high agricultural expenses as major challenges for farmers. An inadequate harvest, poor understanding of market demands, and/or a lack of a minimum price for their crop leads to difficulties in paying off loans and increased family disputes.

Stakeholders felt that the current system of providing monetary grants for purchasing fertilizers is not as effective as the previous fertilizer product provision.

Daily wage labourers are those doing manual labour for cash and have commonly low levels of education. There are no labour laws or organisations protecting the rights of these workers, and they typically work long hours for variable rates of pay (ranging from 800-1200 Rs ~ 5-8 USD).

The stakeholder consensus was that the migration of mothers abroad (the most common form of migration in this area) should be discouraged because of the challenges faced by the children (and husbands) of these women in their absence. There was significant concern about the welfare of children who were left behind, particularly in relation to child abuse. Whilst participants were in favour of the current legal restriction on migration of women with children, the majority of stakeholders highlighted the need for alternative forms of employment for these women and their households if foreign migration is constrained.

Stakeholders agreed that female headed households are materially and socially disadvantaged. They are disempowered both at home and in the community. Traditionally, Sri Lankan culture dictates that women are under the protection of either their parents (during childhood) or their husbands (during adulthood), and are not expected to manage independently. Without the understanding and basic skills needed to empower women to manage independently they become particularly vulnerable to abuse and exploitation. 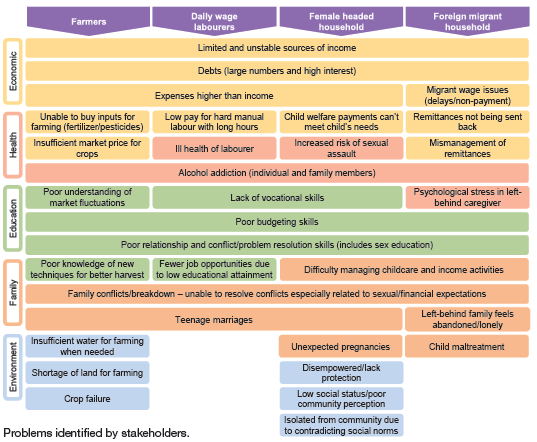 We would like to thank all staff working on the Safe Storage project and all the community members who contributed to this work. We would also like to thank the stakeholders who participated in our workshops and Mr Chamil Priyadarshana, Dr Judi Kidger and Prof Nav Kapur for their help in developing this report.

Priorities for suicide prevention: balancing the risks and opportunities of internet use

The 2008 Global Financial Crisis: effects on mental health and suicide