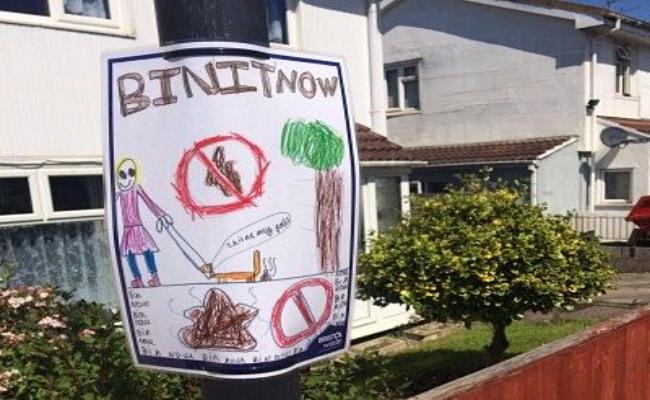 Fouling of public areas by dog faeces has serious public health impacts, not least by discouraging healthy outdoor play. This research engaged schools and communities to support and monitor their efforts to stimulate behaviour change among dog owners.

Children and other vulnerable people are especially affected and soiled areas can put them off outdoor exercise. Lack of exercise is a major contributor to childhood obesity and related adverse health outcomes and outdoor play has many health and social benefits for children.

Eggs from the parasitic dog worm Toxocara can be released from faeces and contaminate soil. This can be dangerous to human health. Past efforts to reduce dog fouling have only been partially successful, and additional resources for enforcement and cleansing are rarely available.

This Bristol-led research engaged schools and community groups to discuss health risks from dog faeces, and provides a ‘toolkit’ of learning materials on the problem.

A ‘Poo Patrol Spray Day’ was organised involving the community with support from the researchers. Posters and data recording sheets were devised, with volunteers stencil-spraying faeces to increase local awareness and encourage behaviour change among dog owners.

The roundworm Toxocara canis lives in the gut of dogs and lays eggs that pass out in the faeces.

Eggs that are released into soil following faecal disintegration can then readily infect the public via contact and ingestion.

When ingested, larvae hatch and migrate around the body, causing inflammation in different organs and other health impacts such as visual impairment, sleeplessness and may be linked to epilepsy and asthma.

Dog fouling: more than a nuisance

These issues are far from unique to Bristol and most communities face a similar problem with dog fouling. Impacts are greatest in disadvantaged communities and with vulnerable people including children, the elderly and disabled.

Removal of dog waste at source is the most effective prevention.

An intractable problem for local government and communities

Although legislation is in place to discourage dog owners from polluting public places, resources for enforcement are scarce and prosecutions are very rare.

Relying on local government to clean up the mess, however, is unrealistic and unfair to tax payers. Individuals have attempted to tackle the issue but their effectiveness has not been documented or shown to reduce dog fouling over a large area.

Awareness of specific public health threats from dog faeces is low among the dog-owning public, leading to complacency and lapses in sanitary action. By linking dog fouling to health outcomes in the local community, and  engaging children as messengers of positive change, the case for proper disposal can be made more powerfully.

A toolkit has been developed through this research to support local action by schools and communities. It has provided positive outcomes in Bristol and can therefore be rolled out elsewhere.

Benefits of the Poo Patrol toolkit

The Toolkit: resources to support school and community participation

Schools and community groups in Bristol were engaged through Sustainable Learning, the national schools programme, to sign up for the Spray Day event. Poster and stencil design competitions were run for children, and stencils produced to display the best slogans. Lessons developed pupils’ awareness of the issues around dog fouling and worm infection, and to elicit creative solutions and interventions. In total 25 schools and 16 community groups registered.

Teachers took classes out locally, where they spray-painted dog fouling and stencilled slogans, displayed pupil-designed posters, and entered data including numbers and locations. Community group actions were co-ordinated with those of school classes.

Two weeks later, the exercise was repeated and the change in the rate of fouling was noted. Hotspots were identified for cleaning and future anti-fouling action.

“We might get a dog at home so I am learning the importance of picking poo up.” Pupil, Torwood House school, Bristol 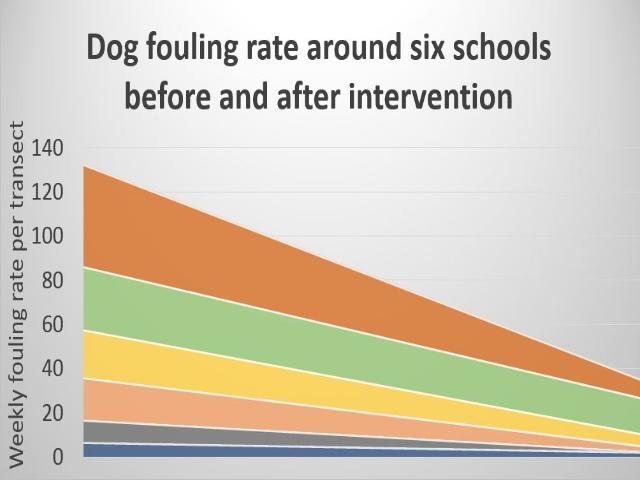 The research presented in this report provides a template for school and community-led initiatives to effect behaviour change and reduce dog fouling. The toolkit is available under licence and can be easily adapted for use in different contexts. By collecting and pooling citizen science data on fouling rates and impacts of intervention along the way, experiences can be compared and the most effective strategies identified. Together we can work for cleaner shared spaces, better public health, and empowered communities everywhere.

Find out more on www.teampoopatrol.com

This research was funded by the University of Bristol through the Brigstow Institute and the University’s Strategic Research Fund, with substantial inputs from Sustainable Learning (Clare Marshall) and the Clean Streets Campaign (Kurt James) of Bristol City Council, which also part-funded the project. We thank the inspirational teachers, pupils and volunteers who brought this idea to life to make a difference.