Mapping the ‘soft properties’ of cities for effective policy interventions

The impressions that people have of a city are often driven by what we call soft properties, its spirit or vibe. But the vast majority of interventions made by policymakers are on the hard properties of a city, such as physical infrastructure and traffic management.

Methods for measuring soft properties directly are typically time consuming and expensive. Subsequently, attempts are often made to infer the properties from easier to measure information. Commonly this is done by selecting a small number of measurements to act as a proxy for the soft properties. This process has two major drawbacks, it does not use all of the information available and the selection procedure introduces the potential for bias. As an alternative we identify soft properties in an existing data set, the census, using a method that does not suffer these problems.

The census data set is rich and detailed. Over 1000 different properties of small geographic regions are freely available. Analysis of the census presents the opportunity to describe the city at a fine spatial resolution, almost at a single building scale in places. 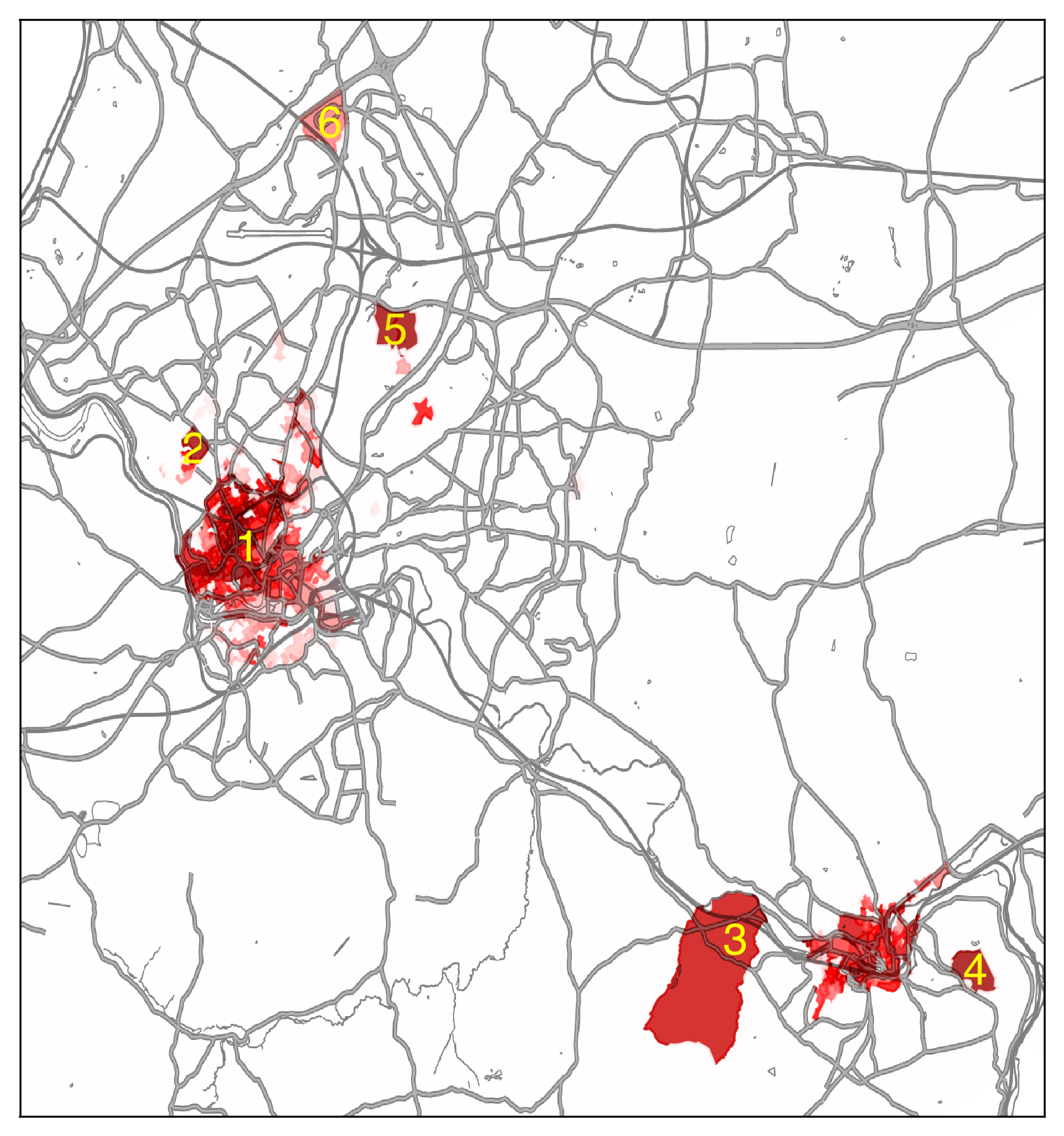 Bristol and Bath Universities: High values of the most important soft property highlight in blue the student and to a lesser extent, young professional populations.

• Using a method called diffusion maps we find a set of variables that describe the differences in soft properties between areas in the city of Bristol, and the relative importance of each of those properties.

• The most important soft property in Bristol is the presence of a large student population in an area.

• The second most important soft property relates to socio-economic deprivation. This closely, but not exactly, correlates to the locations of social housing.

• In some areas of the city differences in socio-economic deprivation is identified at a building level.

• Using these properties we are able to quickly and accurately identify student areas and social deprivation in other cities.

• Further variables are shown to be important, however, establishing the soft properties they correspond to requires further analysis.

Map of Bristol: The second most important soft property highlights areas of social deprivation (blue). These are somewhat associated with areas where there is a large amount of socially rented accommodation.

However, analysis has demonstrated that this property is not dependent on ownership information, but on a set of larger social and economic factors, which can coincide with social renting.

This research provides diffusion maps of census data as a new tool for policymakers. Similarities and differences between areas can now be easily identified aiding design, implementation and assessment of interventions. Examples include:

• Establishing which soft properties are most important in a city can guide which interventions are likely to have the biggest impact. For example, in Bristol the biggest driver of difference between areas is the presence of students, so interventions that alter the distribution of students will have a large impact on the social fabric of the city.

• Some interventions may have already been deployed in different areas with varying success. Soft properties can identify which areas are most similar to those where the intervention was most successful, and so where the greatest benefit may be felt.

• By enabling comparison between areas in different cities diffusion maps can be used to guide the importing of interventions used elsewhere. For example, a scheme that is successful in one particular area in London could be implemented in the most similar area to that in Bristol, increasing its chances of success and the scale of its impact.

• Previously qualitative goals for interventions can now be quantified by the use of soft properties to measure impact.

• Targets for intervention can be better identified. This tool measures soft properties directly, reducing the need for the use of hard properties as proxies. The first step is identifying which soft properties diffusion maps have identified as important, beyond student populations and deprivation.

• The census is only conducted every 10 years. Policymakers should seek the capability to analyse more frequently available data with diffusion maps, and link this to the results from the census.

Map of Bedminster: Zooming into the Bedminster area of Bristol reveals that for larger residential buildings the results show variation in the second soft property at almost building level accuracy. Areas with high values of the property (blue) coincide well with large social housing complexes (yellow outlines). Also highlighted are a hospital and a social home for the elderly (green outlines, top and bottom, respectively).