Based on Bristol’s experience with a directly elected mayor, this research evaluates the move to mayoral governance.

The idea of strengthening city leadership in the UK by introducing directly elected mayors has featured in public policy debates for the last 25 years or more. Supporters claim that they will provide more visible, more accountable, and ultimately more effective city leadership. Yet, despite continued support from high profile public figures such as Tony Blair, David Cameron, and Michael Heseltine, few English cities have adopted this form of urban governance.
The Localism Act 2011 required the largest cities in England outside London to hold referendums on whether or not to adopt a directly elected mayor.

In the ten referendums that were subsequently held in May 2012, Bristol was the only city to vote yes. At the following mayoral election, held in November 2012, Bristol voters again chose a distinctive path by electing an independent candidate, George Ferguson, to lead the city.

The Bristol Civic Leadership Project (BCLP) offers a positive contribution to debates about how to ensure that the mayoral model works well for the city from its initial introduction to how it evolves over time.

There has been a significant increase in citizens who believe the City has visible leadership, although public perceptions relating to trust and representation still remain troublingly low. 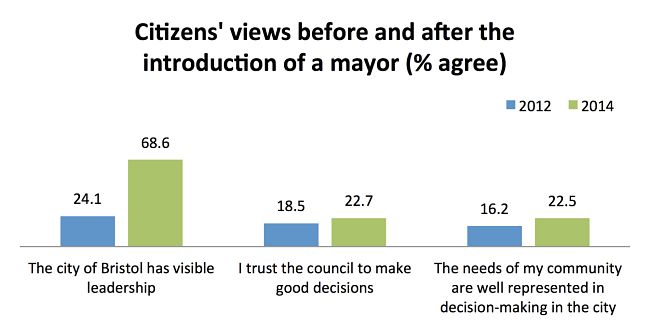 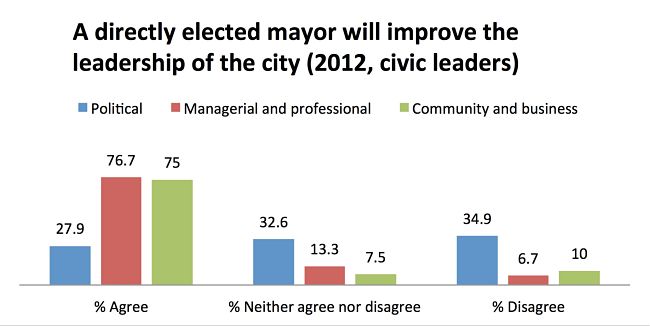 In May 2012 Bristol citizens voted for the directly elected mayor model of governance by a margin of around 5,100 votes, from a turnout of 24%.

The BCLP project is a collaborative action/research project between the University of Bristol, the University of the West of England, Bristol City Council and civic leaders drawn from the community and business sectors. It draws on surveys of the public, surveys of local stakeholders, and interviews and workshops with civic leaders from the public, private, and third sectors in the city. Data has been gathered before and after the introduction of the new system of governance. You can find out more via the website: bristolcivicleadership.net/

Professor Robin Hambleton
Centre for Sustainable Planning and Environments
University of the West of England
robin.hambleton@uwe.ac.uk