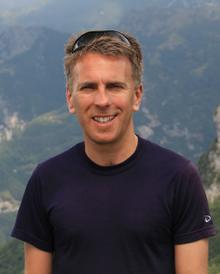 Paul Bates is an expert in the science of flooding. He develops simulations models and combines these with satellite and airborne data to advance fundamental understanding and reduce threats to life and economic losses worldwide.

Paul is a hydrologist by background, a Fellow of the Royal Society and of the American Geophysical Union, a Royal Society Wolfson Research Merit Award holder and in 2019 was awarded a CBE for services to flood risk management.  He is also Chairman of the flood risk analytics company Fathom (www.fathom.global).

He has widespread research interests in risk, resilience, uncertainty, governance and decision-making in relation to natural hazards and global water issues. He is a double recipient of the Lloyd's of London Science of Risk prize and in 2015 he was awarded a 50th Anivversary Prize for Economic Impact by the UK's Natural Environment Research Council.  He has published over 230 papers in international peer-reviewed journals, and these were cited over 2000 times in 2020 according to the ISI Web of Knowledge. He currently has an ISI H-index of 77 (or 97 on Google Scholar). For a full publication list see here.

Paul's main science contribution has been to improve the prediction of flood inundation through the development of new computer models, the use of data from new airborne, satellite and ground sensors and through the better characterization of risk and uncertainty.  For videos of Paul talking about his research see here and here.

He also undertakes significant International collaboration, including work with the French National Space Agency (CNES), Instituto Nacional de Pesquisas da Amazônia in Brazil, as well as numerous universities in the US, Europe and Africa.