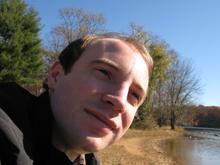 We investigate how anatomical and synaptic plasticity coordinate to change the structure and function of neural circuits in the mammalian cortex. We are particularly interested in the dramatic changes to brain circuitry that occur early in life, when the brain in growing, and in dementia, when brain function collapses. Using high resolution optical stimulation and recording combined with molecular, genetic and electrophysiological methods, we aim to define how external and internal influences on synaptic function control the normal and pathological cortical circuit plasticity that underlies lifelong brain function.

This is an example of the type of connectivity map generated using 2-photon stimulation and patch clamp electrophysiology to detect and measure synaptic connections. Each sphere represents a neuron inside the barrel structure that is found in the sensory cortex. The green neuron was recorded during the experiment and is shown here with all its dendrites. The other neurons were stimulated during the experiment to find those that make synaptic connections with the recorded cell. Only a small proportion of cells, those shown in colour, are connected. This type of map tells us about rates of connectivity, the properties of those synapses and the geometric relationship between connected cells. Comparing these maps at different stages of early postnatal development allows us to understand the processes involved in the formation of circuitry in the sensory cortex (Ashby & Isaac 2011, Neuron 70:510-521).