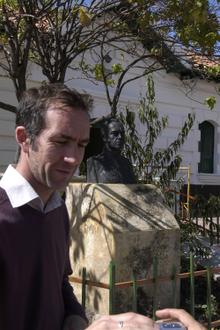 I research and teach the history of South America, from 1800 to the present day, with one focus on the histories of sports and popular cultures, and another on ways of telling uncomfortable histories.

When I left school I applied to the Project Trust, an organization that sends volunteers from the UK around the world. I didn't know anything about the world, so I didn't have any preference as to where they would send me. I spent a a year working as an English teacher in Santiago de Chile. I travelled the length and breadth of the country, reading voraciously and talking and listening incessantly. I learned Spanish and changed my degree programme, then studying Spanish and History at the University of Edinburgh. I spent my Year Abroad with for Amnesty International in Peru, and then as a tour guide in Bolivia, Peru and Ecuador before beginning a PhD.

I have worked in the School of Modern Languages at the University of Bristol since 2005.

I trained as a historian and work across the fields of languages and cultures. I led many interdisciplinary projects across the arts, humanities and social sciences, and have applied the findings of this research to policy and shaping public opinion. I have travelled from archive-based analysis of the social and global history of early nineteenth-century warfare, to future-focused co-production of historical memory in the 2000s, and from the study of war and culture to sports and society in South America. The central thread to this research has been the place of play in society, and the way in which embodied practices are used to legitimate or resist power.

Bringing Memories in from the Margins is an interdisciplinary investigation of the creative ways in which marginalized communities in Colombia have used arts-based methodologies to resist violence: http://www.bristol.ac.uk/policybristol/policy-briefings/the-memories-of-marginalised-communities-need-to-be-part-of-peacebuilding-and-transitional-justice-in-colombia/. It is funded by the Newton Fund, AHRC and the Ministerio de Cultura.

The Quipu Project is a transmedia documentary, film and archive about the unconsented sterilizations 1990s Peru https://ahrc-blog.com/2020/05/28/ending-the-silence-the-quipu-project/.

My most recent book was From Frontiers to Football: An Alternative History of Latin America since 1800 (2014) is a general history of Latin America's engagement with the world, which gives equal importance to sport alongside diplomacy, popular culture alongside commerce. I am currently working on a research project on the history of sport in South America in the late nineteenth and early twentieth centuries.

I welcome enquiries from potential research students across these fields.

I teach Latin American history from the fifteenth-century to the present, specializing in the post-1800 period and with special units on sport and society, the history and culture of Colombia and the contemporary history of Latin America.