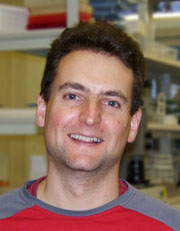 The development of antibiotics was one of the greatest medical advances of the 2oth century and has transformed the outlook for patients with many bacterial infections. However, antibiotic overuse has now lead to the emergence of resistant strains of bacteria including Staphylococcus aureus, the various Enterobacteriaceae (Escherichia coli, Klebsiella pneumoniae) and non-fermenting organisms such as Pseudomonas aeruginosa and Acinetobacter baumannii. All of these bacteria can cause a wide range of opportunist infections in immunocompromised patients and are particularly associated with the continuing problem of hospital-acquired infections. We are interested in the molecular mechanisms by which resistance arises to range of important antibiotic classes. We are also investigating the mechanisms by which one of these organisms, P. aeruginosa, establishes infection.

β-lactams remain the single most prescribed class of antibiotics. Carbapenems, the newest and most potent generation of β-lactams, are rapidly becoming the drugs of choice for treating infections by opportunist Gram-negative bacterial pathogens. In the absence of suitable alternatives carbapenem resistance has the potential to severely impact upon outcomes for patients with these types of infections. We are using structural and kinetic methods to study the molecular mechanisms of carbapenem resistance conferred by a range of metallo-β-lactamases (including the IMP, VIM, SPM and NDM types) and by serine β-lactamases of Ambler classes A and D. These interests also extend to the characterisation of such enzymes from environmental sources that, as has occurred on multiple occasions in the past, have the potential to disseminate into the clinic.  We are collaborating with a range of chemistry groups in the search for inhibitors of these enzymes that might ultimately restore the utility of carbapenems against resistant Gram-negative pathogens.

Fluoroquinolones such as ciprofloxacin are broad-spectrum antibiotics with wide application against a range of Gram-negative and Gram-positive bacteria. As these are fully synthetic agents it was thought that transferrable resistance was unlikely as there is no environmental producer organism providing a source of resistance genes.  However, numerous qnr (quinolone resistance) genes have now disseminated worldwide in a range of (mainly Gram-negative) bacterial pathogens. We have recently determined the crystal structure of AhQnr, the Qnr protein from the environmental bacterium and occasional pathogen Aeromonas hydrophila, and proposed a model for how this interacts with type II DNA topoisomerases such as DNA gyrase, the cellular targets of fluoroquinolones, to protect them from antibiotic action. We are now working to confirm this model using a range of structural and biophysical approaches.

The oxazolidinone linezolid was the first new chemical class of antibiotic to be licensed in more than 30 years and is now a key agent for treatment of infections by multi-resistant Gram-positive bacterial pathogens such as methicillin-resistantStaphylococcus aureus (MRSA). As with fluoroquinolones, these are synthetic drugs and so not thought vulnerable to pre-existing resistance mechanisms. However, the rRNA methyltransferase Cfr is now known to inhibit binding of several antibiotic classes, including linezolid, to the bacterial ribosome. Cfr is a member of the radical-SAM family of bacterial enzymes that use Fe-S clusters to catalyse a range of chemically challenging biotransformations, including (as here) methylations at intrinsically unreactive centres. Cfr has recently been identified on mobile genetic elements in clinical MRSA isolates. We are investigating the mechanism by which Cfr achieves this with the ultimate aim of intervening in this process.

Although responsible for a wide range of opportunist infections, many of the virulence mechanisms of P. aeruginosa remain poorly understood. We have determined the crystal structure of the LasA metalloprotease, a secreted enzyme important to establishing lung infections, and now seek to use this information to better understand the processes, and host responses to, P. aeruginosa colonisation.