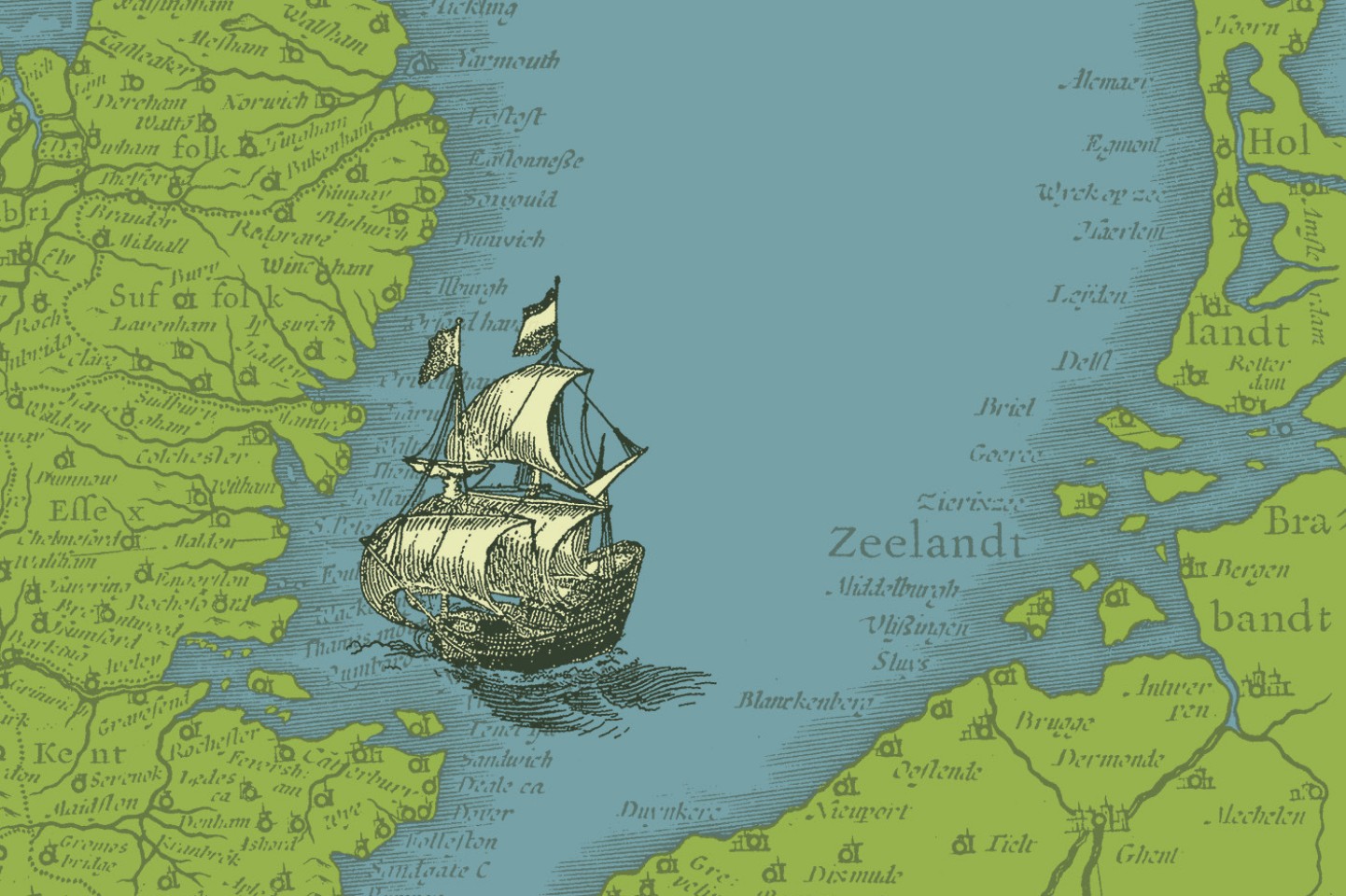 A new exhibition opening next month at the Bodleian Libraries in Oxford, will trace the long history of Anglo Dutch relations. North Sea Crossings is a pioneering collaborative project with the University of Bristol and the University of Cambridge, funded by the National Lottery Heritage Fund.

Focusing on the period from the Norman Conquest in 1066 to the ‘Glorious Revolution’ of 1688, items from the Bodleian Libraries’ collections will illustrate the ways in which these exchanges have shaped literature, book production and institutions such as the Bodleian itself, on either side of the North Sea, inviting visitors to reflect on the way this cultural exchange still impacts British and Dutch societies today.

From manuscript books from the medieval period to the birth of the printing press and the introduction of movable type in Europe, to maps that shows the proximity of England and the Netherlands and the rapid spread of news between the two countries, North Sea Crossings demonstrates the crucial role of collaboration and communication between these two nations.

Curated by Dr Sjoerd Levelt and Professor Ad Putter, both from the University of Bristol’s Department of English and Centre for Medieval Studies, and Anne-Louise Avery, director of the children's educational outreach organisation Flash of Splendour, the exhibition tells the story of Anglo-Dutch exchanges through manuscripts, early prints, maps, and other treasures from the Bodleian’s collections.

Items on display will include ‘Hebban olla vogala’, the oldest surviving fragment of Dutch secular literature from the 11th century; the Coutrai Chest, an intricately carved 14th-century casket inspired by the same battle in Flanders that is the subject of the early Middle English poem The Flemish Insurrection; and a 17th-century woodcut of Holland’s Leaguer, an Anglo-Dutch brothel, which King James I reportedly frequented.

As well as celebrating the development of this cross-cultural partnership, the exhibition reflects on the hostility and discord that arose at times by Dutch migrant communities. Objects such as ‘The Dutch Church Libel’ poem, which was pinned to the wall of a London church in 1593 and threatened Dutch speakers of London, many of whom were refugees of religious persecution, with lethal violence, to an account of the Great Fire of London which tells how suspicion for starting the fire fell on a Dutch baker, illustrate the suspicion and intolerance that on occasion characterised relations between the Netherlands and England during this time.

The character of Reynard the Fox, which exemplifies the shared Anglo-Dutch literary culture, is also explored in the exhibition. Appearing in the margins of manuscripts produced in medieval Flanders for the English markets, the character continues into the age of print with William Caxton’s 1481 English translation of ‘The History of Reynard the Fox’, which reinterprets the tale of this charismatic trickster.

The exhibition also features a display of puppets inspired by the Reynard story created by Katie Williams in collaboration with young people with special educational needs and disabilities. These puppets will be featured in a film produced by Aardman Animations, which will be launched in Spring 2022 as part of North Sea Crossings.

Richard Ovenden OBE, Bodley's Librarian, said: “The Bodleian is proud to have one of the most important collections of Anglo-Dutch material in the world, including the earliest example of secular Dutch writing.

“We are delighted to be showcasing these compelling materials as part of this important project, which we hope will deepen international collaboration and academic research. At a time when travel abroad has been constrained, North Sea Crossings reminds us how deeply interconnected Britain has been with the Netherlands for more than a thousand years, and how much we gain as a society from those connections.”

Professor Ad Putter added: “It has been an absolute joy for our team to research the literature we owe to the interactions of Dutch and English speakers in the past, and I am delighted to see this same collaboration happening in the present and bearing fruit in an exhibition that is very close to my heart.”

North Sea Crossings runs from 3 December 2021–18 April 2022 at The Weston Library, Bodleian Libraries, Oxford. Admission is free and no booking is required. It is funded by the National Lottery Heritage Fund. The opening event will be streamed live on You Tube on Thursday 2 December from 5pm-6.30pm.

This richly illustrated book tells the story of cultural exchange between the people of the Low Countries and England in the Middle Ages and the Early Modern period and reveals how Anglo Dutch connections changed the literary landscape on both sides of the North Sea.

A new edition of the Reynard the Fox story will also be published written by Anne Louise Avery, a writer and historian based in Oxford. Based on William Caxton's bestselling 1481 English translation of the Middle Dutch, but expanded with new interpretations, innovative language and characterisation, Anne Louise Avery’s new edition of this once well-known folktale, published by Bodleian Library Publishing, is an imaginative retelling of the Reynard story and a gripping tale that brings to life the watery lowlands of medieval East Flanders.

Together, the Libraries hold more than 13 million printed items, over 80,000 e-journals and outstanding special collections including rare books and manuscripts, classical papyri, maps, music, art and printed ephemera. Members of the public can explore the collections via the Bodleian’s online image portal at digital.bodleian.ox.ac.uk or by visiting the exhibition galleries in the Bodleian’s Weston Library.

Bodleian Publishing has a diverse list of gift, general interest and scholarly books on a wide range of subjects drawn from or related to the Library's rich collections of manuscripts, rare books, maps, postcards and other printed ephemera.