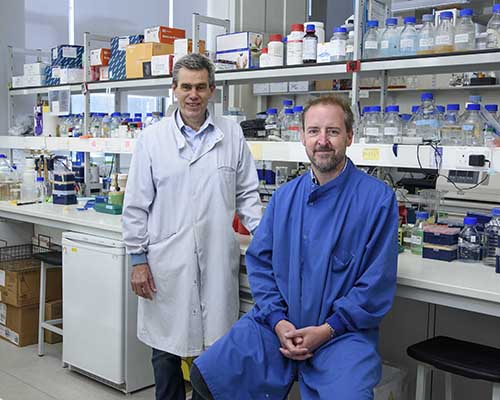 A new national research project to study the effects of emerging mutations in SARS-CoV-2 is launched today [15 January]. The £2.5 million UK Research and Innovation (UKRI)-funded 'G2P-UK' National Virology Consortium will study how mutations in the virus affect key outcomes such as how transmissible it is, the severity of COVID-19 it causes, and the effectiveness of vaccines and treatments.

The Consortium will bring together leading virologists from ten research institutions including the University of Bristol. They will work alongside the COVID-19 Genomics UK (COG-UK) consortium, which plays a world-leading role in virus genome sequencing, and Public Health England to boost the UK’s capacity to study newly identified virus variants and rapidly inform government policy.

The consortium is led by Professor Wendy Barclay, from Imperial College London, who said: “The UK has been fantastic in sequencing viral genomes and identifying new variants – now we have to better understand which mutations affect the virus in a way that might affect our control strategies. We are already working to determine the effects of the recent virus variants identified in the UK and South Africa and what that means for the transmission of SARS-CoV-2 and vaccine effectiveness.

“Now the virus has circulated in humans for more than one year and is prevalent all around the world, we’re in a phase where the virus is constantly throwing up new variants and we need to gear up to assess the risk they pose, and to understand the mechanisms by which they act.”

Science Minister Amanda Solloway said: “The UK has a world class genomics capability, and it is thanks to the work of our leading medical scientists and researchers that our scientists have been able to identify new variants of coronavirus at speed.

“This crucial new research project will help us to understand not only the extent to which these new variants spread and their risks, but also how resistant they are to vaccines and treatments, so that we can tailor our response to help defeat this virus once and for all.”

Professor Dame Ottoline Leyser, Chief Executive, UK Research and Innovation, which funded the study, said: “One of the real strengths of the UK's scientific response to the pandemic has been the way that researchers from all over the country have pooled their expertise to deliver big results, fast. This new national consortium will study the effects of emerging variants on transmission, disease severity, and vaccine effectiveness – building on the work of the COVID-19 Genomics UK Consortium, which has been so effective in identifying new variants.

“This is critical research which will feed into government decision-making on a daily basis.”

Mutations in the virus’s genome occur naturally and some of these will be inconsequential, while others will change how it functions.

As new virus variants arise, the consortium will flag the riskiest variants, such as those associated with fast spreading virus clusters, to study. They will also create standardised versions of the virus with and without each mutation, so they can study the effects of each change individually.

Other teams in the consortium will then study how these new variants alter the virus proteins, particularly the key spike protein on the surface. This is important because changes to the spike protein can affect transmissibility and could potentially alter the effectiveness of vaccines and antibodies that target the protein.

The researchers will then use cell cultures and animal models to study if the virus mutations alter the immune response, virus transmissibility, the severity of the disease it causes, or the effectiveness of vaccines and treatments.

The researchers will study how readily the virus variants transmit by direct contact or airborne routes in animal models. They will also study the impact on disease severity, such as lung damage and breathing impairment, which correlate with symptoms typical of human COVID-19.

Additionally, they will determine whether mutations in the spike protein enable the virus to escape the immune response generated by either the vaccine or immune memory from earlier infection.

Bristol virologists, Dr Andrew Davidson and Dr David Matthews from the School of Cellular and Molecular Medicine and members of the new consortium, will work on producing synthetic copies of the virus that can be engineered to contain single mutations or combinations of mutations, so that they and other members of the G2P consortium can dissect their effects.

Dr Davidson said: “We are pleased to be part of this national consortium that will pool the expertise of the UK’s leading virology teams. This co-ordinated effort will support the rapid analysis of individual mutations present in SARS-CoV-2 variants to determine if they increase transmissibility and disease severity or lead to evasion of vaccine induced immune responses.”

Dr Matthews added: “The recent emergence of new variants of the virus here in the UK and around the world really emphasises the need for this kind of world-class research to understand what the emerging variants mean and if they will affect our efforts to control the virus. Here in the UK and especially at Bristol we are ideally placed to play an important role in this global effort against the virus.”

Professor Massimo Palmarini, co-lead from the MRC-University of Glasgow Centre for Virus Research, said: “Understanding the unique properties of a single SARS-CoV-2 variant requires experiments that can last several weeks. Hence, it is absolutely essential to carry out studies on SARS-CoV-2 variants as a coordinated effort at the UK level.”

Professor Michael Malim, co-lead from King’s College London, said: “It’s really important for the strengths and breadth of UK virology to come together and develop an evidence-base to explain the biological impacts of viral variants, such as possible resistance to vaccine induced immunity, and inform how we should respond and plan for the future.”

By setting up a streamlined, coordinated and openly communicated programme, that operates across the UK to study the latest virus mutations simultaneously in several labs with complimentary experimental methods, the researchers aim to produce faster, reliable results to feed into public health policy and clinical practice.

*The consortium has been named ‘G2P-UK’, standing for ‘genotype to phenotype’. They will study how changes in the virus genes (the ‘genotype’) alters the ‘phenotype’. The term ‘phenotype’ describes the observable characteristics of an organism.

About UK Research and Innovation

UK Research and Innovation (UKRI) is the largest public funder of research and innovation in the UK, with a budget of over £8bn. It is composed of seven disciplinary research councils, Innovate UK and Research England.

We operate across the whole country and work with our many partners in higher education, research organisations businesses, government, and charities.

Our vision is for an outstanding research and innovation system in the UK that gives everyone the opportunity to contribute and to benefit, enriching lives locally, nationally and internationally.

Our mission is to convene, catalyse and invest in close collaboration with others to build a thriving, inclusive research and innovation system that connects discovery to prosperity and public good.