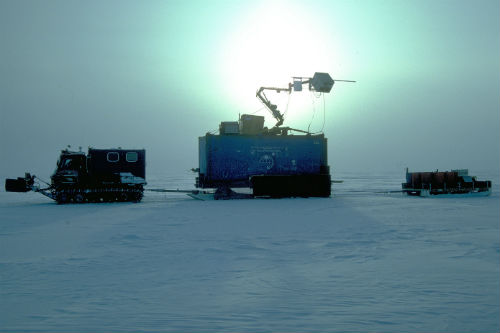 Using the latest satellite technology from the European Space Agency (ESA), scientists from the University of Bristol have been tracking patterns of mass loss from Pine Island – Antarctica’s largest glacier.

They found that the pattern of thinning is evolving in complex ways both in space and time with thinning rates now highest along the slow-flow margins of the glacier, while rates in the fast-flowing central trunk have decreased by about a factor of five since 2007. This is the opposite of what was observed prior to 2010.

Pine Island has contributed more to sea level rise over the past four decades than any other glacier in Antarctica, and as a consequence has become one of its most intensively and extensively investigated ice stream systems.

However, different model projections of future mass loss give conflicting results; some suggesting mass loss could dramatically increase over the next few decades, resulting in a rapidly growing contribution to sea level, while others indicate a more moderate response.

Identifying which is the more likely behaviour is important for understanding future sea level rise and how this vulnerable part of Antarctica is going to evolve over the coming decades.

The results of the new study, published in the journal Nature Geoscience, suggest that rapid migration of the grounding line, the place where the grounded ice first meets the ocean, is unlikely over that timescale, without a major change in ocean forcing. Instead, the results support model simulations that imply that the glacier will continue to lose mass but not at much greater rates than present.

Lead author Professor Jonathan Bamber from the University of Bristol’s School of Geographical Sciences, said: “This could seem like a ‘good news story’ but it’s important to remember that we still expect this glacier to continue to lose mass in the future and for that trend to increase over time, just not quite as fast as some model simulations suggested.

“It’s really important to understand why the models are producing different behaviour in the future and to get a better handle on how the glacier will evolve with the benefit of these new observations.

“In our study, we didn’t make projections but with the aid of these new data we can improve model projections for this part of Antarctica.”