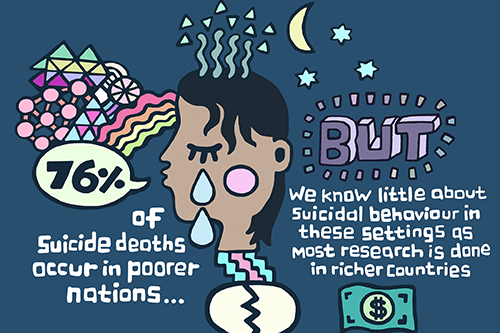 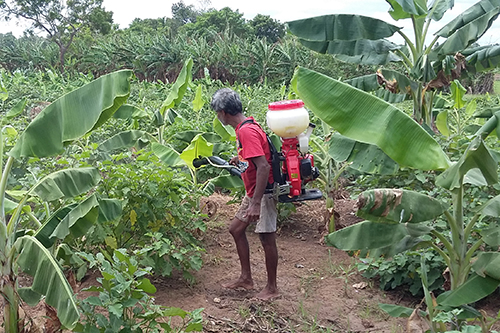 Future treatment and prevention of suicidal behaviour in low- and middle-income countries (LMIC) should involve a wider range of approaches beyond just the treatment of psychiatric illness, according to a new University of Bristol study published on World Mental Health Day today [Thursday 10 October] in PLOS Medicine.

There are 800,000 suicide deaths annually, and the vast majority (76 per cent) are from LMIC.  However, current evidence into suicide prevention is largely based on high-income countries (HIC) and suggests more than 80 per cent of suicidal behaviour is linked to psychiatric disorders. Prevention initiatives in LMIC have been relatively neglected to date.

This study is the first systematic review of the association between psychiatric disorders, such as depression, anxiety and schizophrenia, and suicidal behaviour in LMIC. An international research team, comprising academics from the universities of Manchester, Birmingham, Sheffield Hallam, Nottingham, Western Sydney and National Taiwan University, analysed data from 112 studies on 30,030 episodes of non-fatal suicidal behaviour and 4,996 suicide deaths in 26 LMIC.

The research, which aimed to address the issue of suicide prevention in LMIC, found 58 per cent of suicide deaths and 45 per cent of non-fatal suicidal behaviours were linked to psychiatric disorders. The study also found that the proportion of psychiatric disorders in suicidal behaviour was highly variable, possibly reflecting between-country differences.

In HIC the treatment of psychiatric disorder is a key focus for suicide prevention, but this study suggests that a wider approach might be needed in LMIC.

Dr Duleeka Knipe, Elizabeth Blackwell Institute (EBI) Vice Chancellor's Research Fellow at the Bristol Medical School, said: "This is the first time we've really been able to take an overall look at what we already know about the association between psychiatric morbidity and suicidal behaviour in LMIC. Our analyses show there is a lot of variability between studies and countries, and this suggests there is no one answer, but does support our thinking that psychiatric disorder is perhaps not as important in these settings as in higher income countries.

"Of course, the treatment of underlying psychiatric illness is important but prevention efforts should also incorporate a wider range of activities which aim to reduce access to lethal means, poverty, domestic violence and alcohol misuse. For example, population level solutions, such as banning highly toxic pesticides, have been shown to be effective in reducing the number of suicide deaths."

Nav Kapur, Professor of Psychiatry and Population Health at the University of Manchester and the senior author on the paper, added: "Despite the huge toll of deaths, suicide prevention in LMIC has been relatively neglected to date.  Of course, we need more research – that much is clear.  But we also need to get on and implement solutions based on what we already know."

'Psychiatric morbidity and suicidal behaviour in low- and middle-income countries: A systematic review and meta-analysis' by Duleeka Knipe et al in PLOS Medicine

The World Health Organization (WHO) recognises World Mental Health Day on 10 October every year.  This year WHO are drawing attention to the high rates of death by suicide worldwide, calling for more preventive action across all countries.