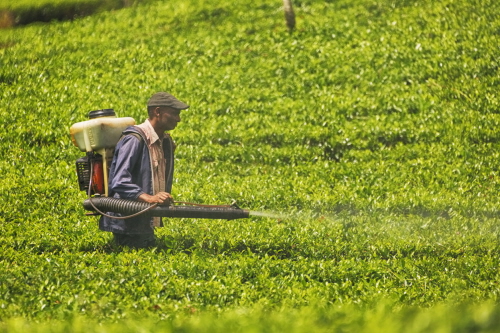 Global policies on access to highly hazardous pesticides – commonly ingested in acts of self-poisoning and suicide in rural Asia – should focus on national bans, rather than safe storage, according to two studies involving University of Bristol academics in The Lancet and The Lancet Global Health journals.

The first study is a randomised trial in 180 villages in Sri Lanka which found that secure storage had no impact on rates of self-poisoning or suicide, and the second is a review of global policies on highly hazardous pesticides which concludes that bans are the most effective way of reducing suicides.

Self-poisoning using pesticides is one of the three most common means of suicide worldwide according to the World Health Organisation (WHO), and accounts for 14-20 per cent of all suicides. Many of these deaths occur in people who live in rural areas in low- and middle-income countries, making it a major public health problem in these regions.

In these areas, a high proportion of the population is involved in farming so pesticides are commonly stored in people’s homes. In contrast, in high-income countries, agriculture is practised on a large scale and most of the population do not use or have access to pesticides.

To restrict access to pesticides and prevent these deaths, the pesticides industry advocates for safer storage of pesticides, an approach that has received some support from the WHO and suicide prevention organisations.

A study published in The Lancet is the first randomised trial to study the effectiveness of this measure, testing whether improved storage reduced pesticide self-poisoning in rural communities in Sri Lanka – where self-poisoning using pesticides is the most common form of self-harm and the fifth leading cause of death.

In villages using the improved storage, posters were displayed to promote the containers, and presentations were given every six months at farmers’ meetings. Other than this, there was no contact between the researchers and the communities for the three years of the study. During this time, suicides and self-poisonings were studied in all people aged over 14-years old.

There were 641 suicide attempts by pesticide poisoning in the control group, and 611 in those receiving lockable storage devices, meaning the rate of people self-poisoning using pesticides was similar between the two groups. There was no evidence of people switching from pesticide self-poisoning to other forms of self-harm.

“We found no evidence to say that improved storage of pesticides reduces the incidence of pesticide self-poisoning,” says senior author Professor Michael Eddleston, University of Edinburgh, UK. “Pesticide self-poisoning is a multi-faceted issue, with prevention requiring work at the individual, community and population level. While our study only looked at one type of secure storage, our findings run counter to current policy approaches advocating improved storage of pesticides to reduce self-poisoning. Combined with evidence from other countries, the trial suggests that policy makers should focus their attention on withdrawal of the most harmful pesticides from agricultural practice.” [1]

The authors note some limitations within their study, including that they only used data from small rural hospitals as evidence shows that this is where most people present to after pesticide self-poisoning, meaning some cases from larger hospitals may have been missed. However, quality controls revealed that very few cases were missed.

In an accompanying article in The Lancet Global Health journal, researchers conducted the first review of literature on the effect of changing regulations to restrict access to pesticides. These include administrative interventions including restricting sales to licenced users and outright national bans on the import and sale of specific pesticides, thereby removing the most harmful pesticides from farming practice.

National bans were effective in reducing pesticide-related suicides in five of the six countries where these were evaluated (all except Greece), and were associated with falls in overall suicide rates in three of the countries (Sri Lanka, Bangladesh and South Korea). However, the evidence for the effectiveness of sales restrictions is less clear as the studies did not provide strong enough evidence.

“A worldwide ban on the use of highly hazardous pesticides is likely to prevent tens of thousands of deaths every year,” says lead author Professor David Gunnell, University of Bristol, UK. “Rather than focussing on safe storage, policy focus should shift towards bans on the pesticides most often used in suicide. This will involve identifying those most commonly contributing to suicide deaths in low- and middle-income countries, and replacing them with safer, less toxic alternatives to ensure pest management is still possible and allay concerns that pesticide bans may reduce crop yields.”

Writing in a linked Comment reflecting on the findings of The Lancet randomised trial, Professor Paul Yip, University of Hong Kong, Hong Kong, says: “Discouraging though these findings may seem, they are valuable in providing insights into the understanding of the complexities of any suicide prevention effort. Suicide is not a disease reflecting well defined pathological mechanisms, and the occurrence of suicidal behaviour is usually the outcome of complex interactions of socioenvironmental, behavioural, and psychiatric factors… Because the causes of suicides are multifactorial, restriction of means needs to be incorporated into a holistic and integrated suicide prevention programme rather than as a standalone measure… There is no silver bullet for suicide prevention and it needs to be understood, implemented, and interpreted in the local context.”