Bristol academics elevated to Fellows of the IEEE 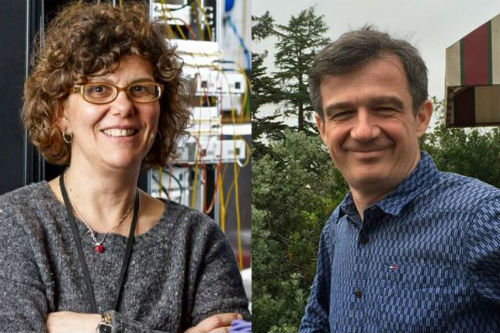 Two University of Bristol academics have been elevated to Fellows of the world’s largest and most prestigious professional association for the advancement of technology.

Professors Martin Kuball, Director of the Centre for Device Thermography and Reliability (CDTR), from the School of Physics and Dimitra Simeonidou, the Director of the University’s Smart Internet Lab from the Department of Electrical and Electronic Engineering, have been named as Fellows of the Institute of Electrical and Electronics Engineers (IEEE).

Professor Kuball has revolutionised the field of thermal management of electronics since joining the University of Bristol in 1997, after working in the USA and Germany.

With power densities in semiconductor devices reaching levels approaching the surface of the sun, managing device temperature has become a prime challenge in ensuring device reliability in many electronic devices.

One major issue has been temperature measurement at sub-micron spatial and nanosecond time resolution, which Professor Kuball’s work has essentially solved by developing Raman thermography.

Semiconductor device lifetime is proportional to the exponential of the inverse of temperature, such as the channel temperature of a heterostructure field effect transistor near to the gate contact.

Being able to quantify accurately this temperature in the active device area is therefore critical for many researchers working in semiconductor device physics and development, and device reliability research and testing.

While measuring a temperature has been possible since the 17th century, the challenge has been to be able determine this temperature with much higher space and time resolution than has been feasible before.

Raman thermography enabled for the first time the accurate measurement of device temperature with sub-micron spatial resolution, time-resolved, non-invasively and contactless as well as in three dimensions through a semiconductor device.

Professor Kuball said: “I am excited that our work on developing thermography techniques to measure the temperature of semiconductor devices is being recognised by the IEEE.”

“Many industries use nowadays what we developed, for example Raman thermography, to qualify their semiconductor products.

“I am proud that we had major contributions to the upcoming Biomass mission of the European Space Agency, supporting UN treaties on the reduction of emissions from deforestation and forest degradation, where Raman thermography was used to qualify space critical semiconductor components.”

Professor Dimitra Simeonidou is the Co-Director of the Bristol Digital Futures Institute and the Director of Smart Internet Lab.

Her research is focusing in the fields of high-performance networks, programmable networks, wireless-optical convergence, 5G/B5G and smart city infrastructures.

She is increasingly working with Social Sciences on topics of digital transformation for society and businesses.

Professor Simeonidou has been the Technical Architect and the CTO of the smart city project Bristol Is Open. She is currently leading the Bristol City/Region 5G urban pilots.

She is the author and co-author of over 500 publications, numerous patents and several major contributions to standards and is a Fellow of the Royal Academy of Engineering and a Royal Society Wolfson Scholar

In addition, she has co-founded two spin-out companies, the latest being the University of Bristol VC funded spin-out Zeetta Networks, delivering SDN solutions for enterprise and emergency networks.

Professor Simeonidou said: “I am really delighted with this honour, which underscores the strength of our research in advancing digital infrastructures and services for Next Generation Internet.

“IEEE is highly regarded within academia and industry and is an organisation whose core purpose aligns with Smart Internet Lab’s vision to lead transformational research in communications and networks.”

The IEEE Grade of Fellow is conferred by the IEEE Board of Directors upon a person with an outstanding record of accomplishments in any of the IEEE fields of interest.

The total number selected in any one year cannot exceed one-tenth of one- percent of the total voting membership. IEEE Fellow is the highest grade of membership and is recognised by the technical community as a prestigious honor and an important career achievement.

Dedicated to the advancement of technology, the IEEE publishes 30 per cent of the world’s literature in the electrical and electronics engineering and computer science fields and has developed more than 1,300 active industry standards.  The association also sponsors or co-sponsors nearly 1,700 international technical conferences each year.