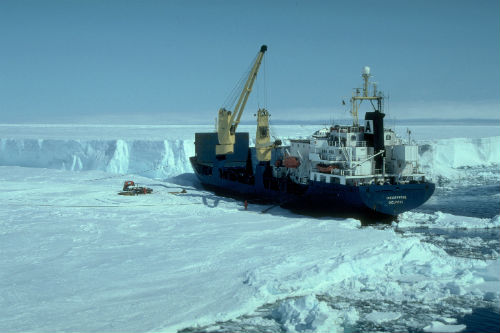 A German supply ship moored at the edge of an ice shelf in West Antarctica. The floating shelf extends for hundreds of miles inland and helps buttress the interior, grounded ice. Professor Jonathan Bamber, University of Bristol 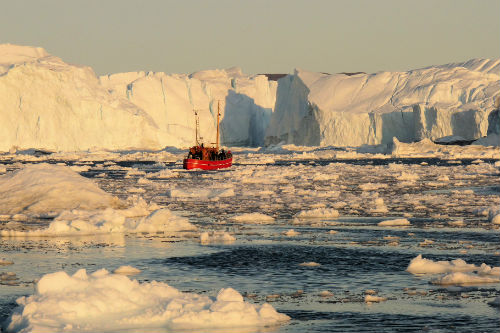 A small boat in the Illulissat Icefjord is dwarfed by the icebergs that have calved from the floating tongue of Greenland's largest glacier, Jacobshavn Isbrae. Professor Jonathan Bamber, University of Bristol

Melting ice sheets in Greenland and the Antarctic, and subsequent sea level rise (SLR) this will cause, is widely recognised as posing a significant threat to coastal communities and ecosystems.

Strategies and measures to mitigate and plan for the potential impacts are reliant on scientific projections of future SLR – conventionally provided using numerical modelling.

Such projections remain challenging due to ongoing uncertainty regarding the evolution of the Greenland and Antarctic ice sheets, particularly in response to climate change.

Using a technique called structured expert judgment (SEJ), an international team of scientists, led by the University of Bristol, asked 22 ice sheet experts to estimate plausible ranges for future sea level rise due to the projected melting of each of the Greenland, West Antarctic and East Antarctic ice sheets under low and high future global temperature rise scenarios.

Their findings are published this week in the journal Proceedings of the National Academy of Sciences of the United States of America.

Lead author Professor Jonathan Bamber from the University of Bristol’s School of Geographical Sciences, said: “SEJ provides a formal approach for estimating uncertain quantities based on current scientific understanding, and can be useful for estimating quantities that are difficult to model.

“Projections of total global SLR using this method yielded a small but meaningful probability of SLR exceeding two metres by the year 2100 under the high temperature scenario, roughly equivalent to ‘business as usual’, well above the ‘likely’ upper limit presented in the Fifth Assessment Report of the Intergovernmental Panel on Climate Change (IPCC).”

The findings suggest that coastal communities should therefore not rule out the possibility of 21st-century SLR in excess of two metres when developing adaptation strategies.

Professor Bamber added: “Such a rise in global sea level could result in land loss of 1.79 million km2, including critical regions of food production, and potential displacement of up to 187 million people. A SLR of this magnitude would clearly have profound consequences for humanity.”

The SEJ process provided an opportunity for experts to discuss their scientific rationales for the quantitative judgments they make on uncertainties relating to future ice sheet contributions to sea level.

This unique approach also served to identify some poorly understood but potentially critical processes, such as “marine ice cliff instability”, which may act in future as significant tipping points in ice sheet response to temperature rise.

A key innovation in this work is the modelling of randomly determined dependences between the processes of accumulation, runoff and discharge at each ice sheet – techniques, say the research team, that they hope can be further developed and applied in other areas of climate research.

Co-author Professor Willy Aspinall, from the University of Bristol’s School of Earth Sciences, added: “It is hoped that the results can provide decision-makers with greater awareness of potential high-end SLR, which is crucial for robust decision making.

“Limiting attention to the ‘likely’ range, as was the case in the IPCC Fifth Assessment Report, may be misleading and will likely lead to a poor evaluation of the true risks.”