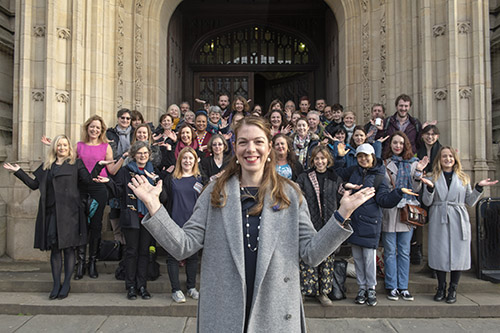 Lucinda Parr, the University's Registrar and Secretary, with staff and students from across the University who gathered for a photo shoot to mark International Women's Day 2019. Julian James 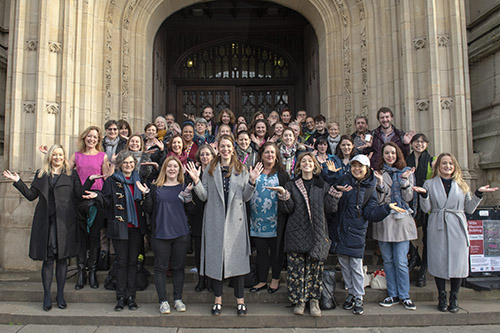 Students and staff came together outside the Wills Memorial Building today [Friday 8 March] for a photo shoot to celebrate the increasing role played by women across the University of Bristol.The event was part of International Women’s Day (IWD), led by the United Nations to showcase the social, cultural, economic and political achievements of women across the world.

The University was the first higher education institution in England to welcome women on an equal basis to men. Today, women make up 55 per cent of the University’s total workforce. Over the last 12 months alone, the University has made 25 senior female appointments in academic and professional services and a third of our senior team are now women. Twelve out of 28 of our Heads of School are women, and two out of seven University Research Institute Directors are women.

The University of Bristol is a founder member of the Royal Society Athena SWAN Charter and is proud to have been one of the first universities to be awarded the Athena SWAN Bronze Award, in recognition of our commitment to advancing the careers of women in higher education and research. The whole-institution commitment to gender equality is reflected in the fact that we have 15 Athena SWAN awards: a bronze at institution level, plus four silver and ten bronze at the school level.

As part of our commitment to celebrating the contribution of women to the University’s development, several notable female pioneers from the University, past and present, were photographed as part of a University commission to mark the 2018 centenary of the first British women winning the right to vote.

Professor Judith Squires, Deputy-Vice Chancellor, Provost and the most senior woman at the University, who features in the portraits on exhibit in the Wills Memorial Building, said: “International Women’s Day provides us with an invaluable opportunity to celebrate female achievement, reflect on the progress we’ve made to date in relation to gender equality, and reaffirm our commitment to gender equality as fundamental to our University’s core values.

“We continue to strive to foster a positive and supportive culture, where all staff and students feel empowered and respected and are committed to mainstreaming gender equality into all our practices.”

Among the events attended by staff, students and the public during the week leading up to IWD was a talk on the role of women in science, a celebration of forgotten female voices in classical literature, a conference for female researchers in philosophy, and a talk by Professor Squires on engendering academic ambition.

Longer term initiatives led by the University aimed at facilitating greater equality include a diversity and inclusion roadmap to help frame discussion around attracting and retaining a diverse range of staff and building a more inclusive working environment. A Women’s Mentoring Network also exists to support staff with everything from planning career progression to managing their wellbeing and negotiating flexible working arrangements.

The University’s Wills Memorial Building will be lit in purple this evening [Friday 8 March] to celebrate IWD 2019.