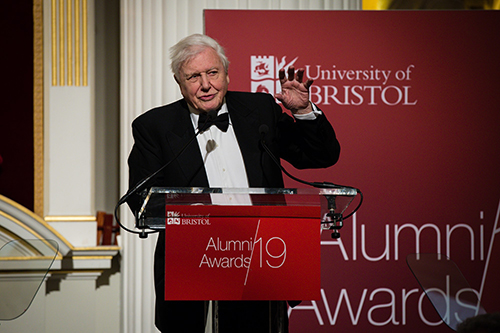 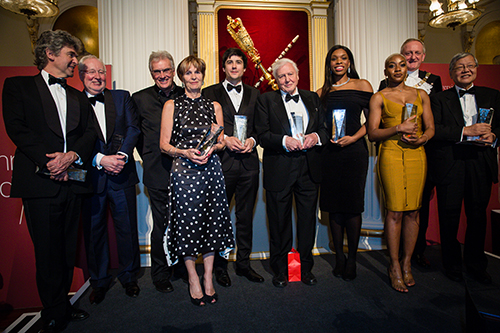 The winners of the Alumni Awards

Sir David Attenborough has urged young people to ‘get engaged, come together and do something’ about the threats facing the natural world.

The much-loved broadcaster was speaking at the University of Bristol's inaugural Alumni Awards, where his achievements were celebrated with a Lifetime Achievement award in recognition of his exceptional career which has spanned more than six decades, inspiring and educating millions by bringing the natural world into our homes.

Sir David has a long association with the city of Bristol through his work with the BBC’s Natural History Unit, which was honoured by the University awarding him an honorary degree in 1977.

He has subsequently worked with Bristol academics for his television series, given talks at the University and opened its £56.5 million Life Sciences Building in 2014, where students are studying the very subjects highlighted in his documentaries.

Sir David said: "Young people are much more aware of how important the natural world is than they were 60 years ago when I began my career. The natural world is under greater pressure than it has ever been, not just in my lifetime but since humans existed.

"This is the first time ever in the history of Homo sapiens that we have had the power to actually transform and protect the world - or to destroy it.

"Your generation knows that, and your children and grandchildren will either be thanking you or blaming you. To an extent we do not have any excuse.

"The history of humanity is a disaster – of arguing, of quarrelling, of wars. That’s got to come to an end. My message to young people is 'get engaged, come together and do something about it'."

In his acceptance speech, Sir David acknowledged that the University was a great source of zoological expertise, as well as a talent pipeline, for the BBC's Natural History Unit.

The University of Bristol Alumni Awards, held at Mansion House in London, celebrated the exceptional achievements of the University's alumni. Other winners included Julia Donaldson, author of The Gruffalo and many other works, gold medal-winning netball player Eboni Usoro-Brown (nee Beckford-Chambers), and recent graduate Chanté Joseph, who has championed the importance of diversity and equality through a variety of roles.

Professor Hugh Brady, Vice-Chancellor and President of the University of Bristol, said: "There's no one more deserving of a Lifetime Achievement award than Sir David Attenborough. Throughout his incredible career, he has educated, guided and inspired generations to care about our planet – achievements which are synonymous with our own mission at Bristol.

"All the pioneers, innovators and leaders we’ve celebrated through these awards are inspiring role models for our students and we’re thrilled to honour them all at our inaugural Alumni Awards."

Professor Brady co-hosted the event alongside alumnus Peter Estlin, the current Lord Mayor of the City of London. Peter studied Economics and Accounting at the University of Bristol, graduating in 1982 before embarking on a 30-year career in finance.

Sabbatical Officers Vanessa Wilson and Stanford compered the evening, presenting the awards in front of a 245-strong audience, who also enjoyed live entertainment from the University of Bristol Gospel Choir.

Julia Donaldson CBE (BA 1970, Hon DLitt 2011) is one of the UK’s best-loved children’s authors, famed for writing favourites such as The Gruffalo, Room on the Broom and Stick Man. Having studied Drama and French at the University of Bristol, Julia’s varied career has seen her create 184 published works and in 2011 she was appointed as Children’s Laureate.

Netball player Eboni Usoro-Brown (LLD 2009, MSc 2011), known as Eboni Beckford-Chambers before she got married, secured a place in sporting history as part of the England team who won gold at the Gold Coast 2018 Commonwealth Games. She made her international debut for England in 2008 while studying as an undergraduate at the University of Bristol Law School, where she also completed an LLM in Commercial Law in 2011. Eboni is captain of the Team Bath netball team.

Nigel Wray (BSc 1970, Hon LLD 2005) studied Economics at the University and is now a director of over 50 companies, as well as the owner of Saracens rugby club. He has been described as ‘Britain’s most successful living investor’. While he is known for his business acumen, he is also renowned for his ability to spot potential and talent in people and his commitment to investing time in them.

Annie Hudson (BSc 1972, Cert 1997) received her BSc in Politics and Sociology and returned nearly 25 years later to study for her certificate in Advanced Urban Studies. She is a prominent social care leader in the UK, who has made a significant impact through her previous role as Director of Children’s Services in Bristol and now at the London Borough of Lambeth. She also held the position of Chief Executive of The College of Social Work and is one of the most admired leaders in UK children’s services. A truly extraordinary person who has been passionate, vocal and integral to improvements in her profession for the last 40 years.

Dr Harry Destecroix (PhD 2014) co-founded University spin-out company Ziylo whilst studying for his PhD at Bristol.  As part of a team led by Professor Tony Davis in Chemistry, he helped to develop a glucose binding molecule which could be the key component of ‘glucose-responsive insulin’ which brings genuine hope to diabetes patients of a ground-breaking treatment. In August last year, pharmaceutical giant Novo Nordisk purchased Ziylo, providing investment and commitment to the team to conduct further research and clinical trials. He has also established Unit DX, a science incubator in central Bristol which ensures that scientific companies in the South West now have access to the facilities they need and are part of a burgeoning science community.

Andrew Sheng (BSc 1989) is a chartered accountant by training and holds a BSc in Economics and an Honorary Doctorate from the University of Bristol. He has had many achievements in global finance which have been acknowledged and recognised around the world. In 2013, Time Magazine named him as one of the 100 most influential people in the world. His career began in Bank Negara, Malaysia, where he rose through the ranks to become Chief Economist and Assistant Governor. He has published widely on monetary, economic and financial issues and he is a regular contributor to leading economic publications throughout Asia. He is deeply committed to the development of his native Malaysia. He and his wife have a passion for the role of higher education in providing opportunities for young people in their home states.

University of Bristol Friends and Supporters Award
Recognises an individual’s service, advocacy and commitment to the University

John Rutley (Hon LLD 2013) is an entrepreneur and businessman who co-founded the hugely successful company A-GAS in 1993 and received an Honorary Degree in 2013. After many years of being at the helm of his burgeoning company, he chose to give back to his home city and work in partnership with the University. The community sports programme was co-developed and personally funded by Dr Rutley to benefit young people across the city, alongside University of Bristol students. Since its inception, in excess of 6,000 children have taken part in the annual Bristol Festival of School Sport and the programme has also helped more than 500 University of Bristol students gain nationally-recognised coaching and leadership qualifications.

Hugh Sloane (BSc 1977) graduated from Bristol in 1977 with a First-Class degree in Economics and Politics and is today a highly successful businessman. He established one of London’s most successful asset management companies in 1993 and is renowned in particular for his knowledge of the Japanese markets. He and his business partner George Robinson went on to create the Sloane Robinson Foundation and made a commitment to support the advancement of the education of the public. In 2017, he and his Foundation gave a landmark gift of £10 million in support of the new Temple Quarter Enterprise campus - the largest philanthropic gift from an individual in the history of the University.

During her time at Bristol, Chanté Joseph (BSc 2018) championed the importance of diversity and equality through a variety of roles. In her first year, whilst studying Social Policy, she was elected as the chair of the student council with the largest margin in the history of student council elections.  In her second year, she launched ‘Bristol is the New Black’ - a project dedicated to giving black students in Bristol a voice, which received funding from O2. During her final year, she founded the BME Powerlist which recognises Bristol’s 100 most influential Black and Minority Ethnic People. Her dedication to effecting change in such a positive manner brought national recognition with a place on the TAB Future 100 list, which describes itself as ‘a definitive list of women at UK universities who are set to achieve incredible things in the future’. Since graduating, she has written for numerous high-profile publications and has her own website with commentary on political and cultural issues.