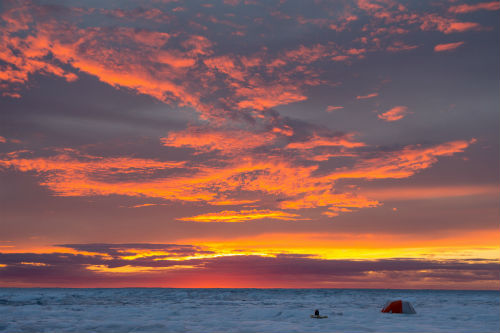 The Greenland ice sheet at sunset - taken by the research team. University of Bristol

New research led by climate scientists from the University of Bristol suggests that the representation of clouds in climate models is as, or more, important than the amount of greenhouse gas emissions when it comes to projecting future Greenland ice sheet melt.

Recent research shows that the whole of the Greenland ice sheet could be gone within the next thousand years, raising global sea level by more than seven metres.

However, most of the predictions about the future of the Greenland ice sheet focus on the impact of different greenhouse gas emission scenarios on its evolution and sea level commitment.

New research published today in the journal Nature Climate Change, shows that in a warming world, cloud microphysics play as an important role as greenhouse gases and, for high emission scenarios, dominate the uncertainties in projecting the future melting of the ice sheet.

The difference in potential melt caused by clouds, mainly stems from their ability to control the longwave radiation at the surface of the ice sheet.

They act like a blanket. The highest melt simulation has the thickest blanket (thickest clouds) with strongest warming at the surface which leads to two times more melt.

Conversely, the lower end melt simulation has the thinnest blanket (thinnest clouds) which in turn leads to less longwave warming at the surface and less melt over Greenland.

The uncertainties in Greenland Ice Sheet melt due to clouds, until the end of the 21st century could equate to 40,000 gigatons of extra ice melt. This is equivalent to 1,500 years of domestic water supply of the USA and 11 cm of global sea level rise.

PhD student, Stefan Hofer, from the University of Bristol’s School of Geographical Sciences and member of the Black and Bloom and Global Mass projects, is the lead author of the new study.

He said: “Until now we thought that differences in modelled projections of the future evolution of the Greenland Ice Sheet were mainly determined by the amount of our future greenhouse gas emissions.

“However, our study clearly shows that the uncertainties in our predictions of Greenland melt are equally dependent on how we represent clouds in those models.

“Until the end of the 21st century, clouds can increase or decrease the sea level rise coming from Greenland Ice Sheet by 11 cm.”

The main message of the paper is that clouds are the principal source of uncertainties in modelling future Greenland melt and consequent sea level contribution.

Ten percent of the global population live in coastal areas threatened by global sea level rise. Therefore, constraining the uncertainties due to clouds in sea level rise predictions will be needed for more accurate mitigation plans.

Stefan Hofer added: “Observations of cloud properties in the Arctic are expensive and can be challenging.

“The logical next step would be to increase the amount of long-term observations of cloud properties in the Arctic, which then can be used to improve our climate models and predictions of future sea level rise.”