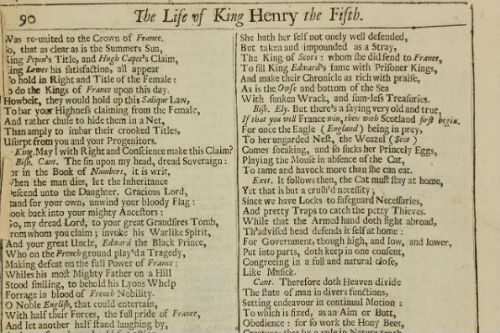 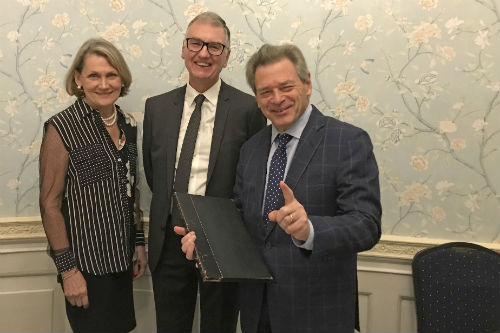 Ely Kahn (right), Lesley Silvester and Philip Kent - the University's Director of Library Services with the folios University of Bristol 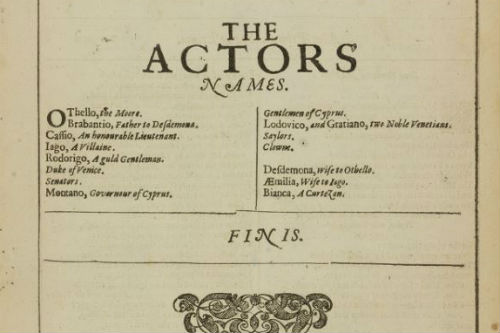 The University of Bristol has received a significant gift of four original double-sided leaves from each of the four folio editions of the plays of William Shakespeare, featuring sections of Henry V, Othello and Antony and Cleopatra.

The four folios were published in 1623, 1632, 1663 and 1685. While around half of the plays they contain had been published previously in individual ‘quarto’ versions, the 1623 Folio was the first to bring Shakespeare’s plays into a single collection.

Assembled by two of Shakespeare’s fellow actors, it also contained many plays, including Macbeth, which had never been published before.

Copies of it are rare and very valuable and only 230 complete versions survive to this day.

The generous gift was presented to the University by Ely Kahn III inspired by his partner Lesley Silvester, an alumna of Bristol and Director of the University’s US Foundation.

Ely and Lesley were both present at an alumni event held in New York in April 2018 hosted by the University of Bristol’s Chancellor, Sir Paul Nurse.

At the dinner, the Chancellor highlighted the University’s plans to create a world-class library at the heart of our Clifton Campus.

The plans include 2,000 reader seats, an active collection of books and journals and a new home for the University’s cultural collections, including the Theatre Collection, one of the world’s largest archives of British theatre history and Live Art.

"My wife Lesley Silvester and I couldn't be happier that Bristol's new library will be home to the four folio leaves," said Ely Kahn. "The leaves were an important part of a collection begun by my grandmother. Several years ago, the Morgan Library in New York City advised me that we should consider finding an institution that would preserve and protect them. When I learned of the University's plans for the library and that the prestigious Theatre Collection would be housed there, I was convinced that our leaves should be there, to be seen and studied."

The rare folio leaves are housed in the Theatre Collection, and they are available for consultation, teaching and academic research purposes across the university and beyond.

They have been digitised and made available via our online catalogue, and students will use them as a source of creative inspiration as well as scholarly research. They are an important and unique addition to our collections.

In future, we will incorporate the leaves in formal exhibitions in the gallery spaces in the new library when it opens in 2023/24 and continue to encourage student and public engagement with them.

Dr Laurence Publicover, a Senior Lecturer from Bristol’s Department of English, said: "It is wonderful to have at Bristol a physical part of this 1623 edition of Shakespeare’s plays, whose importance to English literature it is difficult to overestimate, and to witness, across the four pages, a glimpse of the print history of those plays in the first 60 years after Shakespeare’s death.

“When teaching literature at Bristol we frequently ask students to consider the conditions of textual production, transmission, and reception, and it will be valuable and inspiring for students to see at first-hand some of the materials through which Shakespeare’s plays become available to early generations of readers and performers."