Connect for the best view at this year’s Harbour Festival 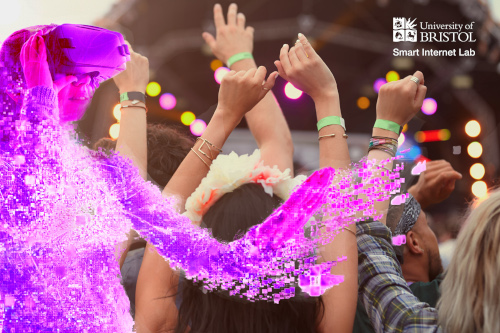 The University of Bristol's Smart Internet Lab is part of a consortium bringing tech innovation to this year’s Bristol Harbour Festival, giving visitors a 360° view of all three stages on their smartphones.

Led by the West of England Combined Authority (WECA), the £9.2M 5G Smart Tourism project will use live streaming of 360° camera footage to test the use of 5G technology at scale in a festival setting.

The best view for festival goers

Visitors to the festival can access the 360° live streams by going to their WIFI settings and choosing ‘harbour360’ and visiting festival360.uk.  It’s completely free and only accessible to festival goers in Millennium Square and Amphitheatre.

There will be a Smart Futures marquee at the festival in Millennium Square, which will give visitors the chance to find out more about the project, access the 360° footage and use VR headsets.

After the festival, the 360° footage will be stored within the Bristol City Council archives creating a unique record of the city’s vibrant culture.

At certain times during the festival, the 5G network will be ‘sliced’ to simulate the use of the network as a robust communications channel for the emergency services during a public safety emergency, while maintaining live streaming of high-quality video footage for users.

The use of 360° cameras across the festival site will also support the Harbour Festival’s application for gold standard ‘Attitude is Everything’ award (improving deaf and disabled people’s access to live music).  By capturing 360° footage of key routes into the festival, it will provide disabled visitors with valuable information to make choices about how best to access and move around the festival site.

This focus on public safety and accessibility will provide valuable insights for other cities and events.

Part of a Smart Region approach

West of England Mayor, Tim Bowles said: “The West of England is the UK’s leading smart city region. Our work on the use of 5G technology has the potential to revolutionise the way we all live and work, transforming everything from assisted living to motoring to air quality. This initiative is a really exciting opportunity to lead the way on the potential for 5G at major public events like the Bristol Harbour Festival.”

Margot James, Minister for Digital said: “The Government is investing in the infrastructure that will make Britain fit for the future and a world leader in 5G.

“Smart Tourism is a fantastic project which we’re excited to extend funding for.  It will help realise the innovative ways 5G can boosts our top tourism attractions, not just in the West of England but across the UK.”

The 5G Smart Tourism project is led by the West of England Combined Authority (WECA), and part-funded by the Department for Digital, Culture, Media & Sport.

Bristol Harbour Festival takes place on 19-21 July 2019 along the waterfront, from Welshback to the SS Great Britain.

The Smart Internet Lab at the University of Bristol is a hub for internet research which addresses grant societal and industrial challenges. We perform cutting edge research on optical and wireless communications and offer a unique holistic approach to hardware and software co-design, solving critical problems in the global internet evolution. We are world leaders in 5G convergence research and have deployed 5G capability in Bristol city centre focusing on the convergence of fibre infrastructure and 5G wireless access. The University of Bristol's 5GUK Test Network is the UK’s first urban 5G End-to-End Testbed.