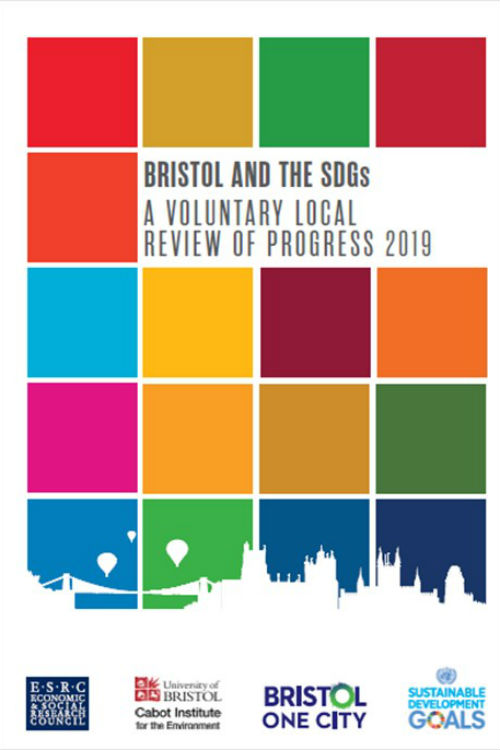 A new report from the University of Bristol, demonstrating Bristol’s leadership in tackling global challenges through local action, will be presented at the United Nations (UN) in New York next week.

The report summarises progress and challenges in areas ranging from education to economic growth to inequality to climate change and highlights the wide range of organisations working to make the city of Bristol, and the world, a more sustainable one.

Written and produced by the University’s Cabot Institute for the Environment, it was first presented at Friday’s City Gathering in Bristol where over 200 city stakeholders from business, voluntary sector, politicians and activist groups met to discuss the Bristol City Office, One City Plan and what progress has been made in the last six months.

The UN Sustainable Development Goals (SDGs), agreed at the United Nations General Assembly in 2015, provide a framework for thinking and acting holistically to achieve sustainability. They are often referred to the ‘closest thing the world has to a strategy’ for building a more environmentally sustainable, inclusive and prosperous world.

As a city, Bristol has signed-up to the SDGs and the actions in the One City Plan have been mapped against them.

The 17 Global Goals set out 169 targets to be achieved by the year 2030. These targets cover a wide range of issues, such as poverty, economic inequality, gender equality, education, health, infrastructure, energy, climate change, biodiversity, governance and more.

Progress towards achieving these targets is tracked through ‘Voluntary National Reviews’, usually conducted by national governments. The UK Government has completed its first Voluntary National Review (VNR) which will be presented at the UN High-Level Political Forum in New York, where the SDGs, on a global level, are reviewed annually.

But cities are increasingly seen as pivotal arenas for tackling these global challenges through local action and Bristol is leading the way.

It is the first UK city—and one of just a handful of cities around the world—to publish its own progress report, or ‘Voluntary Local Review’, which will also be presented at the UN next week when a Bristol representative will join the UK delegation.

The report will be presented at an event co-hosted by United Nations Development Programme (UNDP) and the Institute for Global Environmental Strategies.

The Bristol representative will also be taking part in a conversation about city leadership on the SDGs hosted by the Finnish Mission to the UN.

Unlike previous city-level reports, this one wasn’t written by the city council, but rather independent researchers at the Cabot Institute for the Environment at the University of Bristol.

It reflects a whole city approach to tackling the SDGs and includes information on the activities of nearly 100 Bristol based organisations working to make the city more economically, environmentally and socially sustainable as well as data on over 140 indicators covering all 17 SDGs.

Dr Sean Fox, Senior Lecturer in Global Development from the University’s School of Geographical Sciences, is the report’s lead author. He said: “It’s a mixed picture. In some areas, such as improving early years education and reducing premature deaths from preventable causes, Bristol has made significant progress.

“In other areas challenges remain. Despite a strong local economy and rising wages overall, the gap in earnings between the top 10 percent and bottom 10 percent grown in recent years. And there has been an increase in the proportion of people who have been victims of racial discrimination or harassment.

“But overall, the report reflects a strong local commitment to helping tackle global challenges through collaboration and partnership by highlighting dozens of local initiatives aimed at addressing the global goals here in Bristol.”

Mayor Marvin Rees has been a strong supporter of the SDGs in Bristol. He said: “By publishing this Voluntary Local Review and reflecting on our progress, we are sending a strong message to the world that we are willing to take action to achieve a fair, healthy and sustainable city where nobody is left behind.

“The SDGs cannot be delivered solely through the drive of national governments. All levels of government — local, regional, national, and international — must work together. Local leadership, with its immediate connection to the complexity of people’s lives, is well positioned to tackle the challenges we face.

“We are making a case for empowering local government to tackle the issues on the ground in our communities. I’m incredibly grateful to the University of Bristol for their partnership in producing this Voluntary Local Review and their ongoing support of the City Office.”

Ablaze is an independent local charity that aims to tackle education inequality in the West of England. They do this by inspiring and motivating students to raise their aspirations and stay engaged with education. Activities delivered encourage students to set personal goals and work out their own plans for achieving them. Ablaze is working with a number of Bristol based organisations including Airbus, Bristol Water, Burges Salmon, Ovo Energy Rolls Royce, TLT and UWE. They are also supported by Business West who champion and encourage their members to volunteer in primary schools as mentors.

In 2018 Bristol City Council unanimously passed a motion declaring a climate emergency. It called for the Mayor to make a pledge to make Bristol carbon neutral by 2030, work with central government to provide the powers and resources to make this possible and work nationally and internationally to determine and implement the best practice methods to limit global warming to less 1.5°C as set out by the Paris Climate Agreement. Since then a City Gathering with nearly 200 city stakeholders has been held to accelerate progress towards becoming a carbon neutral city. Alongside this action, both universities are working in partnership with the City Council’s Sustainability Team to provide research capabilities and in April 2019 the University of Bristol became the first UK university to declare a climate emergency and similar target of carbon neutrality by 2030.

Feeding Bristol, in partnership with the Bristol City Office, Bristol Chamber of Commerce Initiative, United Communities, Together4Bristol and the Blue Finger Alliance (amongst others), are tackling ‘holiday hunger’ by providing fresh meals every weekday of the school holidays in the wards where the proportion of children receiving free school meals is highest. The Feeding Bristol initiative aims to feed over 50 percent of the children who would normally receive free school meals.

About the Cabot Institute for the Environment: