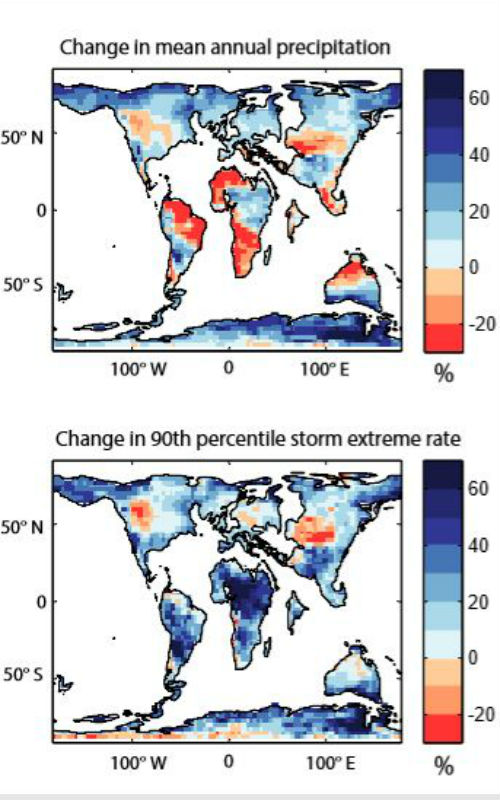 Top panel shows modelled change in annual mean rainfall (as a %) given a global warming at the PETM, ~56 million years ago. Bottom panel shows the same thing but for extremes in rainfall. The key thing is that in some regions, the rainfall decreases (top panel is red) but the extremes in rainfall increase (bottom panel is blue), such as in southern Africa, the Amazon, or northern Australia. This is what we mean by a "decoupling". BRIDGE – University of Bristol

A new study by scientists at the University of Bristol has shown that ancient global warming was associated with intense rainfall events that had a profound impact on the land and coastal seas.

The Palaeocene-Eocene Thermal Maximum (PETM), which occurred about 56 Million years ago, is of great interest to climate scientists because it represents a relatively rapid global warming event, with some similarities to the human-induced warming of today.

Although there have been many investigations of how much the Earth warmed at the PETM, there have been relatively few studies of how that changed the hydrological cycle.

This newly published work shows that rainfall increased in some places and decreased in others, according to expectations, but that much of the world experienced more intense and episodic (or ‘flashy’) rainfall events.

Lead author Dr Matt Carmichael from the University’s Schools of Chemistry and Geographical Sciences, said: “With the same climate models used to study future climate change, we studied how a doubling of carbon dioxide concentrations would affect rainfall patterns on a world with Eocene geography.

“This increased the overall global precipitation – warmer air holds more water.  But it also changed the pattern and frequency of extreme events.

“The tropics became wetter and the incidence of extreme events increased, by as much as 70 percent in some tropical regions.

“In other places, total annual precipitation and the number of extreme events became decoupled; in other words, they became drier, with less frequent but more extreme events.  All of this illustrates the complexity of how global warming will affect our local, regional and global rainfall patterns.”

Co-author Professor Rich Pancost from Bristol’s School of Earth Sciences, explained how these findings agree with a range of geological and chemical features of the Palaeocene-Eocene global warming.

He said: “This warming event is associated with major changes in how soil and sediment were eroded and moved around the landscape.

“In many places, river systems that had been transporting silt or sand became associated with fist-sized rocks or even boulders; and more sediment was transported to and buried in coastal margins. In some locations, the rate of sediment accumulation increased by a factor of ten. But at the same time, there is also evidence that these systems became more arid.

“Our climate simulations reconcile this for many locations, showing an increase in aridity with fewer but more intense rainfall events.  Those events were likely responsible for increased energy in these systems, moving around more material and larger objects. Ultimately it flushed more sediment to the ocean, causing eutrophication, blooms of algae and in some cases hypoxia.”

Co-author Professor Dan Lunt from the School of Geographical Sciences added: “There are many similar events in Earth history, where warming appears to have been associated with changes in rainfall and sedimentary systems.

“Although we have not investigated them here, it is very likely that our results are translatable – because the physics that underpins them remains the same.  Thus, the collective body of research confirms that global warming in the past and the future will be associated with more ‘flashy’ rainfall, with implications for flooding and water management.”

Professor Pancost said: “Past climate has lessons for our future.  Not only do the models show evidence for more intense rainfall events – with all of the implications that entails – but they are consistent with all of our other data.

“In fact, they explain inconsistencies in our other data and confirm some long-established hypotheses. In doing so, they foreshadow our potential future with complex and dramatic changes in rainfall, more flooding and more soil erosion.”

‘Changes in the occurrence of extreme precipitation events at the Paleocene-Eocene thermal maximum’ by M. Carmichael, R. Pancost and D. Lunt in Earth and Planetary Science Letters

The Cabot Institute carries out fundamental and responsive research on risks and uncertainties in a changing environment.  We drive new research in the interconnected areas of climate change, natural hazards, water and food security, low carbon energy, and future cities. Our research fuses rigorous statistical and numerical modelling with a deep understanding of social, environmental and engineered systems – past, present and future. We seek to engage wider society by listening to, exploring with, and challenging our stakeholders to develop a shared response to 21st Century challenges.  Find out more about our work at www.bristol.ac.uk/cabot

The OGU was founded in 1968 and since then has been at the forefront in the investigation of organic matter in organisms, soils, sediments and rocks.  The group was the first to look for evidence of organic matter in the Apollo 11 lunar rocks, pioneered the field of archaeological chemistry and created numerous new tools for reconstructing Earth’s climate history.  Find out more about our work at http://www.bristol.ac.uk/chemistry/research/ogu/

The Greenhouse Earth System Research grant was awarded by the European Research Council to University of Bristol Cabot Institute scientists Rich Pancost (PI), Dan Lunt, Paul Valdes, Heather Buss, David Naafs and Richard Evershed.  The aims of the project are to develop new molecular proxies – especially for environmental processes that remain poorly understood – and apply them to past warm climates.  Simultaneously, the project is adapting the most recent climate modelling advances and applying them to ancient climates.  The project has been informed by the Uncertain World conversations during Bristol’s year as the European Green Capital, facilitating linkages between our understanding of ancient climates and the needs of cities and nations.

Bristol Research Initiative for the Dynamic Global Environment (BRIDGE) is carrying out research centred on understanding the past, present, and future Earth system, with a focus on climate and biogeochemical modelling, and geochemistry.